Paint By Numbers and Muy Marcottage.

The artist Carine Légeret is modelling “Paint By Numbers,” a Muy Marcottage dress.

This dress was made from secondhand clothing found at the San Lorenzo outdoor market in Rome. The top part was a boring white summer dress that I gave some color to by transforming it into a pseudo-paint by number kit. 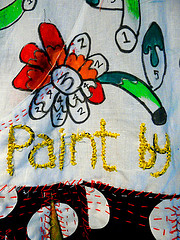 Remember those Paint By Numbers kits so popular starting with the 1950’s?And that so many people bought them seems to imply that many want to be an artist whether or not they have talent. PAINT BY NUMBER kits guarantee A Successful Painting.  Instant gratification can sometimes make life easier!

In the book Math and the Mona Lisa: The Art and Science of Leonardo Da Vinci, the author tells us that it was Leonardo who invented “paint-by-numbers” so that his assistents could help him with his commissions. 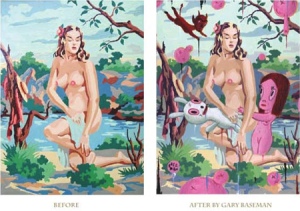 related links: Counting on Art (and Painting by Numbers)—-

Paint By Numbers, artists who work in the paint by number style—Paint by Numbers Goes Highbrow at Chelsea Gallery—-Giant Paint by Numbers—-artist Trey Speegle—Jenn Jarnot Paintings—- 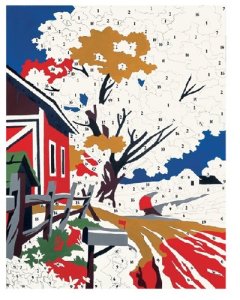 Do It Yourself (Landscape) by Andy Warhol

The History Of Paint-By-Numbers—-DIY Paint By Numbers Projects—As a child I received a Paint by Number set for Christmas or a birthday. —- 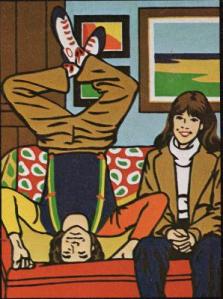 KRISATOMIC,Paint by Numbers…..I loved the paint by numbers-y patterns at Basso & Brooke and Jill Stuart

MORE:  Painting-by-Number #1—The Philosophy of “Paint-by-Number!—Paint by Number: The How-to Craze that Swept the Nation book—-

The real-life Da Vinci Code: Historians discover tiny numbers and letters in the eyes of the Mona Lisa—Leonardo Da Vinci was a painting-by-numbers hoaxer—–Paint by number Oil Painting The Last Supper By Leonardo Da Vinci 70cmX160cm—

The Storyteller....
View all posts by Art for Housewives →
This entry was posted in Muy Marcottage and tagged carine, Leonardo da Vinci, paint by numbers, Reconstructed fashion, Recycled clothing. Bookmark the permalink.

2 Responses to Paint By Numbers and Muy Marcottage.