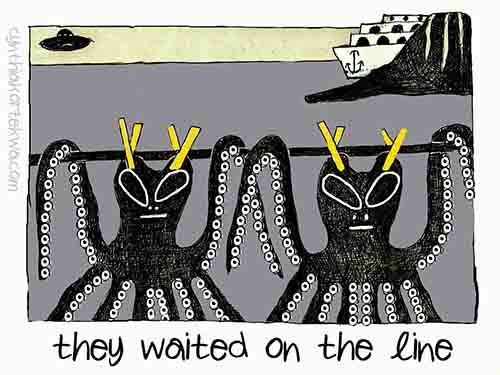 Outside tavernas here on Paros, it’s not difficult to see octopuses hanging out to dry so they’ll be tastier when cooked. I normally don’t give them much thought but today while walking by, I got the feeling that they were looking at me. 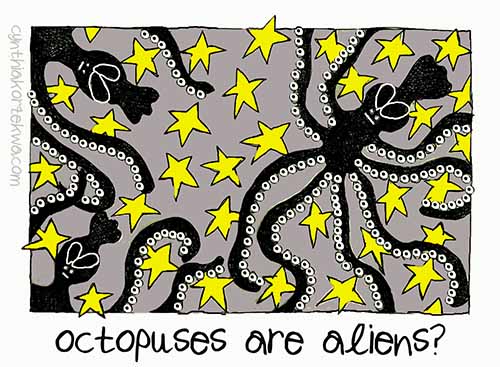 Maybe I took notice of them because of all the recent internet articles referring to them as aliens.

Because of their “out of this world” genetic make-up, the late zoologist, Martin Wells, said that octopuses were aliens because their DNA is so complicated it couldn’t have originated on earth.

Apparently octopuses are smarter  than one would think as they are able to opens jars, solve puzzles and hold a grudge. Octopus suckers have chemo-receptors  that allow the octopus to taste what it’s touching. They automatically reject touching themselves to avoid becoming a tangled mess.

The ability of Paul the Octopus to predict the 2010 World Cup only adds to the alien theory.

The octopus was a favorite motif for Minoans, an ancient civilization that mysteriously disappeared.  Some scholars speculate that their disappearance was caused by the Santorini volcano whereas others say they were invaded by barbaric ”sea people”.

And, of course, there are those who believe that their disappearance was caused by aliens.  After having helped the Minoans to evolve, the aliens simply dismantled their  civilization when it no longer served them.

So,  should octopuses be in outer space or on the grill?

The Storyteller....
View all posts by Art for Housewives →
This entry was posted in Drawings & Paintings and tagged Martin Wells, Minoans, ocotpus aliens, Paros, Paul the Octopus. Bookmark the permalink.