The Pursuit of Beauty

Sissi, aka Empress Elizabeth of Austria, was fixated with her physical appearance. And the older she got, the more maniacal she became. When the first signs of aging appeared, she refused to be photographed and carried a fan to cover her face. Her beauty routine took up much of her time. Not only did she exercise for hours every day, her diet consisted mainly of juiced raw veal and fruit. Sissi bathed in seaweed and olive oil and it daily took three hours to care for her knee length hair.

On the morning of September 30, 1898, Sissi was stabbed on the streets by anarchist Luigi Luchini. When the doctor came to medicate her wound, he cut open her tightly laced corset which caused her to bleed to death as the corset had been acting as a tourniquet. Sissi was only 60 years old. 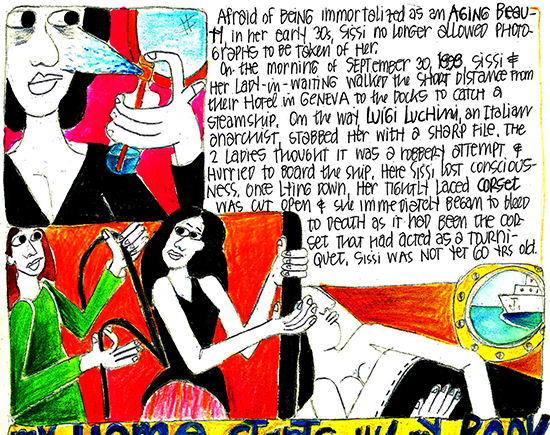 The Storyteller....
View all posts by Art for Housewives →
This entry was posted in Age of Reconfiguration, Beauty, Drawings & Paintings and tagged beauty routine, Empress Elizabeth of Austria. Bookmark the permalink.