It’s been awhile since I’ve blog due to my daughter’s knee injury and the breakdown of my modem.  Hopefully, my blog will pick up some animation now!

Last year I had been presented the possibility of teaching a workshop in Senegal (which, unfortunately, I later had to refuse) and that led me to researching gris-gris, amulets worn for protection from evil.  Often the gris-gris is a small cloth or leather pouch containing small objects or written verses.  The idea of wearing writing for magical purposes fascinates me as my Muy Marcottage huipiles and dresses all have words or phrases stitched onto them.

One link leads to another and that’s how I discovered the work of Irini Gonou. Irini’s work is very poetic and deals a lot with magic scripts and apotropaic texts.  She has a series of work entitled The Sheltering Word representing her exploration of the healing and protective powers of the written word. 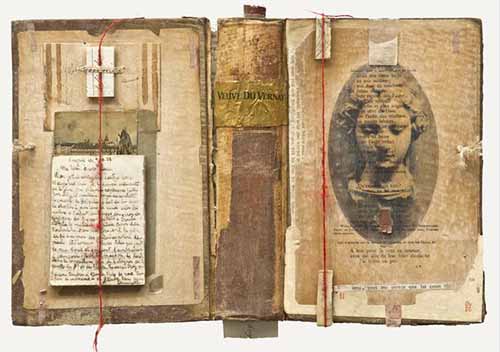 for more information regarding the writing used by Irini, read this interesting interview:  Irini Gonou’s “A Tale of Two Cultures” | Published under Caspian Arts Foundation 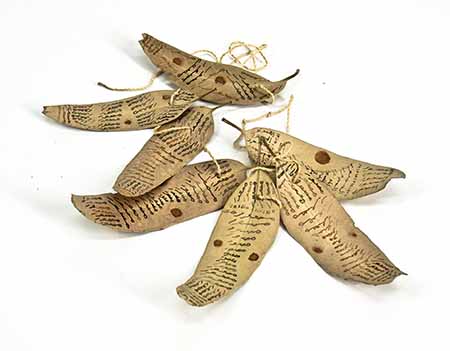 Apparently Blaise Pascal, the French mathematician and philosopher, was also into magical writing.  Around 1654, he had a mystical vision and then wrote about it.  And if that wasn’t enough, he sewed this “Memorial” onto the lining of his jacket.

P.S.  Thank you Jo for telling me about this!  Above is a foto of scribbles made by Australian gum moths on the bark of a eucalytus tree. Looks like some kind of stream of consciousness writing, no? Australian writer, Nancy Cato, wrote about this phenomenon in her children’s story  Nin & the Scribblies.

The Storyteller....
View all posts by Art for Housewives →
This entry was posted in People and tagged gris-gris, Irini Gonou, magical writing, Muy Marcottage. Bookmark the permalink.