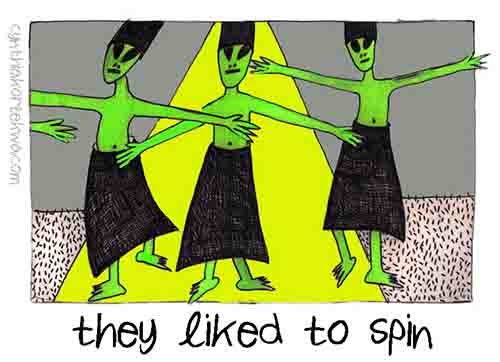 One day the Persian poet Rumi was walking in the market place when he heard the goldbeater’s rhythmic hammering. The beating sounded to him like the repetition of the words “there is no god but Allah”.  This made him so happy that he spontaneously stretched out his arms and started spinning around in circles.  And this was the beginning of the Whirling Dervishes.

Spinning is a fundamental condition of our existence.  Just think about atoms, planets and chakras. Life is about motion.  That’s why vibration is important for our health. And what better example of Good Vibration can there be than music?

Ninth cen. Muslim philosopher Al Farabi, who could play a musical instrument so well that he could make people cry or laugh at will, is best known for his book Kitab al-Musiqa which describes the healing effect that music has on the body.  For example, certain musical tones can lower both heart rate and blood pressure.

The Storyteller....
View all posts by Art for Housewives →
This entry was posted in Drawings & Paintings and tagged Al Farabi, Music, Rumi, spinning, the Martians are coming, Whirling Dervishes. Bookmark the permalink.