A truly beautiful person is one who is good at discovering beauty. Daisaku Ikeda

For my birthday, on my FB timeline Franca posted a Daisaku Ikeda essay entitled “The Flowering of Creative Life Force”.  One phrase in particular really struck me:  “Never for an instant forget the effort to renew your life, to build yourself anew.”

And what is a birthday if not the celebration of one’s own renewal?

The joy of creating one’s life is often neglected because, for one reason or another, we abandon ourselves to the current.  But why abdicate our right to be the protagonist in our own life’s story?

Every day we can re-create our life by the choices we make.

For my birthday, a lunch with truffles and a visit to the Toulous Lautrec exhibit at Ara Pacis—c. 170 lithographs (dating 1891-1900) from Budapest’s Museum of Fine Arts.

Henri de Toulouse-Lautrec , born in 1864, came from an aristocratic family.  His parents, busy bickering with one another, continually left Lautrec in the care of a nanny. Lautrec was also traumatized by congenital health problems which prohibited proper healing when he broke the femur bones of both legs. Thus Lautrec developed an adult-sized torso whereas his legs remained like those of a child.  Unable to dedicate himself to physical activities, he turned to drawing and painting.

For awhile he signed his paintings “Lost” because “Toulouse” sounds like “to lose”. But, anxious to find his way, subsidized by his mother, he moved to Paris and set up studio in Montmartre. And it was here that his career as an artist took form.

The Pigalle/Montmartre area was populated by anarchists, petty thieves, starving artists, socially wounded women, and, in general,  people who were defeated, lost, and emotionally scattered. And for those who feel they have nothing to lose, transgression becomes a part of life.

The bored rich, hoping to wake themselves up, were intrigued by transgression and thus  Pigalle became the mecca of their pleasure & diversion.

Maybe being surrounded by the marginalized distracted Lautrec from his own handicap. He was particularly drawn to the  Moulin Rouge.  Much of his inspiration came from the women who worked there.

When the Moulin Rouge hired Lautrec to do a poster for their club, the dancer featured was Jane Avril. Jane was a bit strange.  Her abused childhood led to a nervous disorder that caused Jane to move in a jerky and contorted way This disorder, commonly known as St. Vitus Dance, forced her to check into a hospital for the mentally ill. But this disorder was the basis of her wild and wonderful  ecstatic dancing that helped her get a job at the Moulin Rouge.

Jane was radically thin, fond of fashion, determined to become a star, intelligent and aloof and extravagant in her ways. Lautrec liked her a lot and the two spent much time together.

Eventually age nerved her out so, at the age of 42, she decided to marry the German artist, Maurice Biais and the two moved to the outskirts of Paris. Unfortunately, her husband had an ambiguous sexuality and spent much time roaming around in search of himself. When he died in 1926, he left Jane penniless and she struggled to survive until her death in 1943 at the age of 75. 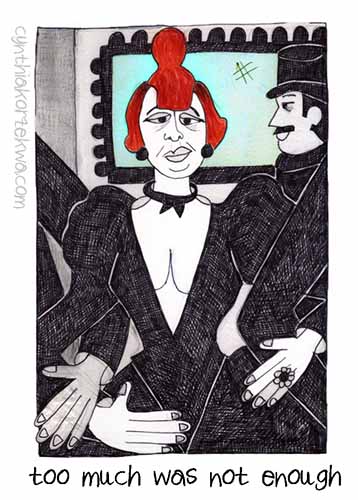 Her real name was Louise Weber but she was known as La Goulue, The Glutton, because of her habit of consuming customers’ drinks while dancing around their tables.  At an early age, she mastered the quadrille but her real talent was the can-can, a dance involving high kicks and the lifting of skirts. The name “can-can” means, more or less, “tittle-tattle” and initially created quite a scandal. But in some ways it was an manifestation of the need for social change because it questioned the concept of respectability. Lautrec adored the dance and said  La vie est belle, voila le quadrille!  (Life is beautiful, here comes the can-can!)

Her audacious behavior was captivating and La Goulue lost no time in becoming the Queen of Montmartre. She enjoyed kicking her legs up high enough to knock off men’s hats  thus  exposing the heart embroidered on her panties.  The audiences adored her but it went to her head as she decided to leave the Moulin Rouge and start her own dance company. It was a mistake that left her bankrupt and depressed.  So she began drinking and soon was too fat to kick up her legs.  La Goulue spent the last years of her life toothless, homeless, standing on a street corner near the Moulin Rouge selling matches and peanuts.  Wouldn’t she be happy to know that Brian Ferry sings about her in “Do The Strand”. 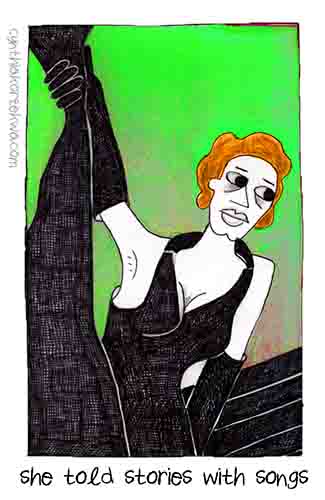 Yvette Guilbert was a singer, actress and song writer. Her slightly sleazy songs were half sung, half spoken earning her the title of the “diseuse fin de siècle” (end of the century storyteller). She was lanky and easily recognized by the long black gloves she wore.

Yvette was friends with Sigmund Freud.  They met after Freud, in Paris for a convention, heard her sing.  The two enjoyed corresponding for a number of years until Freud wrote that her talent as an interpreter came from “repressed desires and traits that haven’t had a chance to develop.”  Yvette was not pleased and their relationship chilled for several years.

Most all of the women Lautrec portrayed were Montmartre style. However, in  August 1895 while on a cruise from Le Havre to Bordeaux, Lautrec became infatuated with a young woman from cabin 54 and secretly photographed  her as she sat languidly and read.

The artist is often a voyeur.

Because of his handicap, Lautrec was active with his eyes and not with his body.  While others participated, he sat back as spectator. Thus he became an expert in observation noting details yet capable of distinguishing the superfluous from the essential.

While most of Lautrec’s fellow artists were involved in Impressionism thus plein air painting, his handicap kept him indoors. Instead of landscapes, Lautrec focused on people drawing them continuously.  And, as he once wrote his mother, he considered going to the caffès every evening as work because it was there that he diligently sketched the people who populated his paintings.

The posters Lautrec began making for the Moulin Rouge and other clubs and theaters gave a definite direction to his artistic style and the graphic needs of a publicity poster were integrated into his art. An affiche must go straight to the point thus– incisive, bold colors, large surfaces, and big enough to be seen from afar.

In the late 1890s when Lautrec was making these posters, there was no digital printing. Lithography was used to make multiples.  So Lautrec became an expert lithographer.  The technical demands of lithography led Lautrec to become an expert in simplification and immediacy. 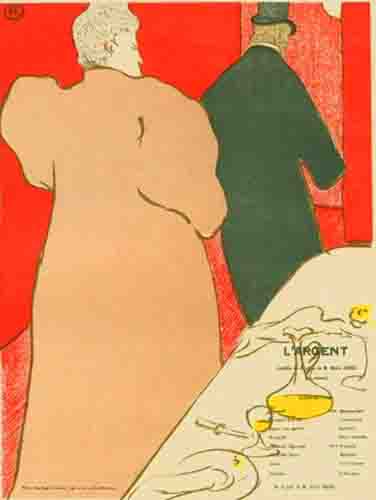 For example, the lithograph “L’Argent, Programme de Theatre”  shows how, with the minimum of gesture, Lautrec gave the maximum of information. Look how he used a few short lines to transform a blotch of color into a coat. Genius!

Towards A Photogenic Lifestyle Observation: I can renew my life every day and it can be relatively easy if I can learn how to get the maximum from the minimum. But learning how may take time.

As a result of his absinthe and brandy cocktails, Toulouse-Lautrec died in 1901 at the age of 36.

4 Responses to Truffles and Toulouse-Lautrec