Posted on January 1, 2018 by Art for Housewives

Born in the waxing Victorian era, biophile Edith Holden was an artist and teacher who liked getting on her bike and riding around the countryside to observe nature, the flora and fauna of the British countryside, and the changing season.  She transcribed these observation into drawings and descriptions in a journal she called “Nature Notes”.

Edith came from an unconventional family.  Her parents were Unitarians with a strong interest in Spiritualism and regularly held séances in their home.

William Morris’ Arts & Crafts movements influenced her greatly. Edith married the sculptor Ernest Smith and left the countryside.  But she continue her nature outings.  One March morning, she went to collect some nature near the banks of the River Thames.  While trying to break-off a bough of chestnuts buds with her umbrella, she slipped and fell into the river. The current was too strong and fast for Edith. She drowned at the age of 49.

Sixty- four years later, the journal was discovered in a dining room cupboard and published as The Country Diary of an Edwardian Lady.

December 9 “We woke up to a storm of whirling snowflakes this morning.” 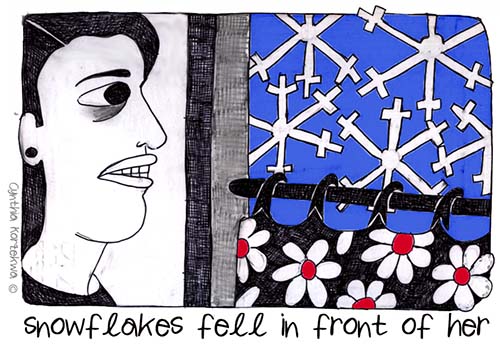 December 28. Skating has commenced in the fens. 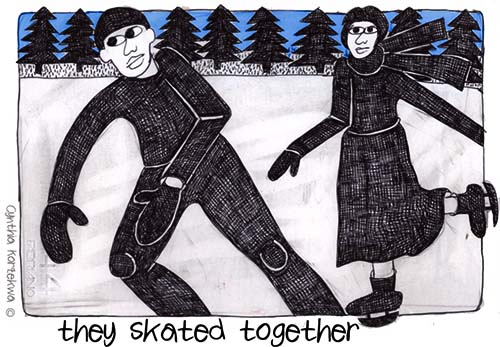 March 10. When I got to the bottom of the lane, I set my bicycle against a bank and pic-niced on a fence.

Jan.2,3: Sharp frost and a thick fog in the early morning. The fog cleared off about 9:30 and the sun shone brightly. Went for a country walk. Every twig on every tree and bush was outlined in silver tracery against the sky; some of the dead grasses and seed vessels growing by the roadside , were especially beautiful, every detail sparkling with frost crystals in the sunlight…

March 20: Went to the daffodil  field again; the buds are just breaking into yellow. Found two thrush’s nests, both in holly bushes; one nest was empty, the bird was sitting on the other. She looked at me with such brave, bright eyes, I could not disturb her, much as I would have like a peep at her speckled blue eggs…

April 29: Saw a lovely little Hedge-sparrow’s nest in a Gorse bush with four eggs in it. The Gorse was in full bloom and made a glowing contrast with the blue eggs in the mossy nest.

(from The Diary of Luz Corazzini, Cynthia Korzekwa © )