This is a hupil I made from an old pair of sweat pants and lace remnants given to me, in part, by my mom. The red stitching running across the front diagonally reads “feminist“.

Not long ago, while discussing animatedly,  a male friend of mine  called me a feminist as if being a feminist was something bad. Initially, I reacted defensively but then thought “Who is this dude to talk to me about feminists”? A feminist is simply a woman who tries to protect her rights and the rights of other women. So why do so many men have a problem with this?

We live in a world excessively masculinized and, for the past 5,000 years, women have been treated as inferiors. It was not always this way. Once, when life was considered sacred, women were revered for their major contribution to the life cycle.

Once upon a time, the many cultures of this world were all part of the gynocratic age. Paternity had not yet been discovered, and it was thought … that women bore fruit like trees—when they were ripe. Childbirth was mysterious. It was vital. And it was envied. Women were worshipped because of it, were considered superior because of it…. Men were on the periphery—an interchangeable body of workers for, and worshippers of, the female center, the principle of life.

The discovery of paternity, of sexual cause and childbirth effect, was as cataclysmic for society as, say, the discovery of fire or the shattering of the atom. Gradually, the idea of male ownership of children took hold….

… women gradually lost their freedom, mystery, and superior position. For five thousand years or more, the gynocratic age had flowered in peace and productivity. Slowly, in varying stages and in different parts of the world, the social order was painfully reversed. Women became the underclass, marked by their visible differences.

The concept of democracy has been around for c 2,500 years but women have been voting only for the past 100. This means that for 2,400 years society has evolved dominated by male and not female values.  And we see where that has taken us! 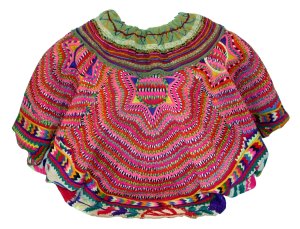 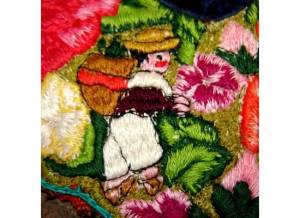 Inside out hupil coin purse by Grain Design found here

If you are in Rome, please check out by Muy Marcottage dresses, ponchos and huipiles at Mercatino Monti next Sunday, November 18.

1 Response to Feminists and Huipiles