My Rob Brezsny horoscope recently referred to Mary Ruefle’s (Madness, Rack and Honey) description of  two huge trees uprooted by a storm that are compared to the fragile bird’s nests which, instead, had remained intact. The message: what is most vulnerable will have more staying power than that which is massive and fixed. 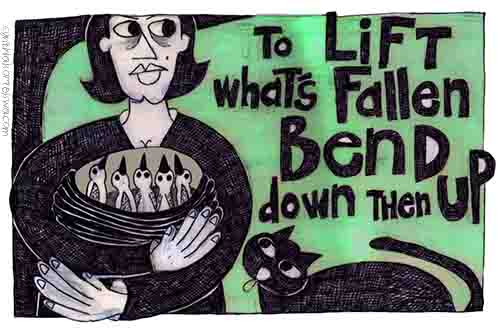 Despite the blows, my nest’s integrity remains.

As part of My Photogenic Lifestyle Project, I’d thought about starting a Make-Believe Diary based not on what actually happened as much as what I wished had happened hoping positive thinking and affirmations would achieve desired change. Unfortunately, I have this bad habit of inventing projects for myself since they’re easier to visualize than they are to actualize. And the make-believe diary is too demanding of a project for me right now.  But a haiku a day is not!

A haiku is traditionally 17 syllables divided into three lines with a 5-7-5 pattern.  But I will use a more freeform sauvage style. Because the intent is to take time out for the moment and exercise mindfulness…to be poetic and not a poet.

Haiku is a way of turning excess into essence. It means focusing on what’s important and ignoring the rest. Because, as Robert Browning said, LESS IS MORE.

The Storyteller....
View all posts by Art for Housewives →
This entry was posted in Drawings & Paintings and tagged haiku, less is more, Madness, photogenic lifestyle, Rack and Honey, Rob Brezsny horoscope, Robert Browning. Bookmark the permalink.