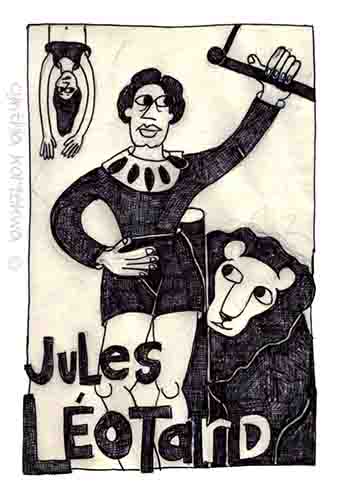 Jules Léotard  knew how to swing.  Not only did he invent the trapeze, he also invented the leotard, a one piece knitted suit that facilitated his acrobatics.   At the height of his career, Jules married the actress, Silvia Bernini.  But when on tour, he’d tell everyone that Silvia was his mistress, not his wife. The humiliated Silvia, not a swinger, attempted suicide by throwing herself in the Seine.  Luckily, she survived and it was Jules who died a short time later of smallpox.

Holding on is a matter of choice.

The Storyteller....
View all posts by Art for Housewives →
This entry was posted in Drawings & Paintings and tagged Jules Leotard, Swingers. Bookmark the permalink.