Her mother sung in a choir and her father was an operatic stage manager.  So there is no surprise that Claudia Muzio became an opera singer. Her father’s job kept them on the move.  Although from Italy, Claudia’s family lived in London when she was a child giving her the chance to learn English before moving to Turin where she studied music at the age of 16.

Claudia’s career began early and moved forward with intensity.  Known as La Divina Claudia, she even sang with Caruso. It was the popular opinion of the times that Claudia was unsurpassed in her portrayal of Violetta in La Traviata (The Fallen Woman). 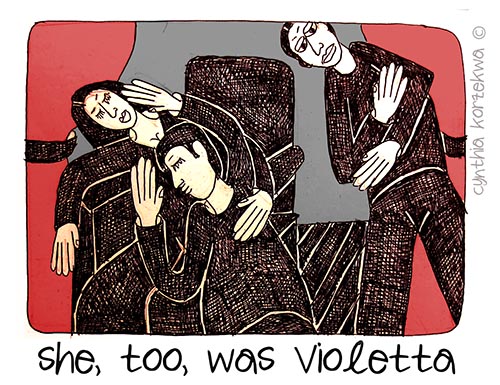 Internationally famous, in 1919 she went to Buenos Aires. And it was here that she met Aristotle Onassis. Onassis was born in Smyrna in 1900. During the Smyrna massacre of the Greeks in 1922, much of his family was killed.  It’s said that he had a homosexual relationship with a Turkish lieutenant in order to have his father freed from prison. Afterwards, Onassis and his family moved to Athens.

The Onassis family had had a successful tobacco business in Turkey but those days were gone and, as many other Greeks who’d been forced to leave Smyrna, Onassis had a difficult time surviving economically.  So he left for South America. Initially he worked for the phone company where he had no qualms listening in on the conversations of others.  This is the way he heard about a film that was to be made with the protagonist constantly smoking cigarettes giving him the idea of going back into the tobacco business and creating his own brand of cigarettes aimed at the female market. And to promote this cigarette, he needed someone famous to sponsor it.  Although he didn’t know her personally at the time, he decided on Claudia.  One evening he showed up in her dressing room with a huge bouquet of flowers and seduced her.  Claudia was 11 years older than Onassis and probably very flattered that he was so interested in her without realizing what his main objective was. 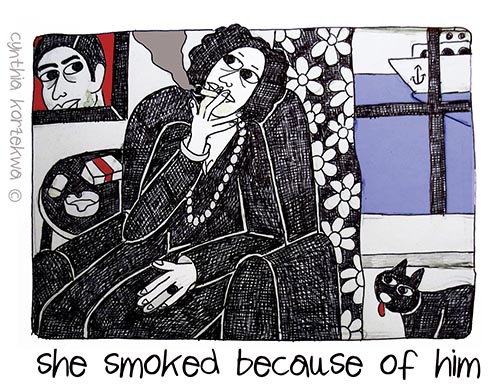 Onassis convinced Claudia to promote his cigarettes and the publicity he received helped him earn quite a bit of money.  By the time he was 25, he was, thanks to the cigarettes, a millionaire. Now Onassis no longer needed Claudia and dumped her. Eventually he realized that the shipping magnates made more money shipping the cigarettes than he did in making them.  This happened right at the time of the Great Depression so, with the money he’d made from the cigarettes,  he easily bought six ships for half their value.

Not only a millionaire, Onassis was a playboy.  He said “I see every woman as a potential mistress.  Beautiful women cannot bear moderation—they need an inexhaustible supply of excess.”  So excess is what he gave them.

In the meantime, Claudia’s interpretation of Violetta had inspired another opera singer—Maria Callas.  In 1959, Maria and her husband, Battista Meneghini, were invited to a jet set party on Onassis’ yacht “Cristina”.  Other guests included Churchill, the Agnelli couple and Grace Kelly and her husband the prince. Onassis owned stock in the principality of Monaco and, when the value of his stock started going down, he convinced Prince Rainier that he needed to marry someone famous to promote Monaco and its casinos—the same strategy  used with Claudia to promote his cigarettes.  The  two decided upon Grace Kelly.

On board the Cristina, something chemical happened between Onassis and Maria. Maria decided she couldn’t live without the rich tycoon and left her husband to pursue a romance that would only provoke sorrow for her.  She was 36 and Onassis 53. The two had a relationship for years until Onassis dumped Maria for Jackie Kennedy.

So had it not been for Claudia Muzio helping Onassis make so much money, maybe Onassis would not have become rich and famous thus in the position to become Maria Callas’ lover and Jackie Kennedy’s husband.  Who knows.

Poor Claudia was not lucky in love. After Onassis, she married a man who invested her money in the stock market and, with the Wall Street Crash of 1929, she lost everything.  This provoked a series of health problems leading to heart failure.  Claudia died in a hotel room in Rome at the age of 47.

And one could think that Onassis adored opera music having had two soprano lovers. But he once made the remark that opera was like listening to two Italian cooks fighting over a recipe.  It’s more than likely he preferred rebetika, a kind of Greek blues that evolved in the 1920s when the Greeks who fled Turkey settled in Piraeus.

Claudia Muzio (1889 – 1936) is buried at the Verano Monumental Cemetery in a tomb designed by Pietro Canonica.  For fotos go HERE.

Related:  Onassis, Jackie and me