Living in a world of voyeurs

Posted on November 7, 2017 by Art for Housewives

A few years ago, Jason Huntley became suspicious when he noticed that TV commercials seemed to be especially tailored for him and his family.  With the use of a laptop, he discovered that there was an invisible bridge between his TV and his computer and that, unknown to him, data had been transferred from his home to the manufacturers of his TV, LG in South Korea.

This phenomena is not just limited to LG.  Samsung and Vizio have been caught doing much the same.  And the ability to use TV & Co for espionage is so strong that Huawei has been banned in the US for fear that the Chinese will use this kind of technology for spying.

Well this kind of spying could make some people happy.  For example, if you’re an exhibitionist anxious to do a striptease for an unknown Asian executive.  Or if you’re an unemployed actor anxious for an audience.

Standing in line just dying to watch you is Big Brother, metadata collectors, and hackers anxious to get your credit card number.

So dilemma of the moment:  What to wear this evening when I watch TV ? 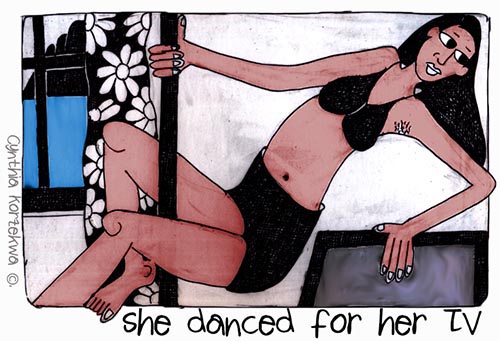 Related:  LG investigates Smart TV ‘unauthorised spying’ claim + Most smart TVs are tracking you — Vizio just got caught + Smart TV company Vizio was fined $2.2 million for tracking what customers watched without permission + WikiLeaks Adds to Samsung Headaches With Claims of Spying TVs + Vault 7: CIA Hacking Tools Revealed + What Your Computer Could be Doing to Your Face + Why is Huawei banned in the USA?

The Storyteller....
View all posts by Art for Housewives →
This entry was posted in Drawings & Paintings, Lifestyle and tagged TV. Bookmark the permalink.

2 Responses to Living in a world of voyeurs