Not all diaries are meant for long wordy entries.  But it takes talent to sum up the day’s events in one sentence.

“A Line A Day” diaries are set up in such a way that each day of the month is divided into five parts on one single page so that the diary is used for five years. It doesn’t leave much space but, as the years progress, you can easily compare the present with the past.

For c. 85 years, Beatrice Wood (1893-1998) kept “A Line A Day” diaries. She was able to stuff her daily activities into one sentence– an incredible feat considering the kind of life she led.

A rebel from a wealthy American family, the young Beatrice went to study art at the Julien Academy in Paris.  More than focusing on art, Beatrice focused on artists and Bohemian lifestyles.  With the arrival of WWI, she was forced to go back to New York.  Here she hung out with Duchamp & Co and was known  as Mama of Dada. Beatrice and Duchamp were involved in a ménage à trois  relationship with Henri-Pierre Roché, the author of Jules et Jim. Despite some gossip, Beatrice was not the inspiration for Catherine.  However, she did inspire the character of Rose in James Cameron’s Titanic.

With her ménage buddies, Beatrice created the Dada magazine The Blind Man mainly to defend the submission of Duchamp’s rejected R. Mutt  urinal in the Society of Independent Artists Exhibition in 1917.

For years Beatrice enjoyed acting but eventually became disenchanted with it because “You know, acting is very fascinating. But being an actress is not, because you become so concentrated on yourself.”

Thanks to the encouragement of Duchamp, she started drawing. But her true artistic passion became working with clay and glazes. Beatrice also developed an interest in Oriental Philosophy and, in the late 1940s, she moved to Ojai, California to be near the Indian philosopher, J. Krishnamurti.

At the age of 90,  her friend Anais Nin convinced her to  write her autobiography, I Shock Myself. Beatrice lived to the age of 105.  When asked the secret to her longevity, she responded ”I owe it all to art, chocolate, and young men.” Other memorable quotes include “Celibacy is exhausting”  and “You can’t change the world, you can only change yourself.” 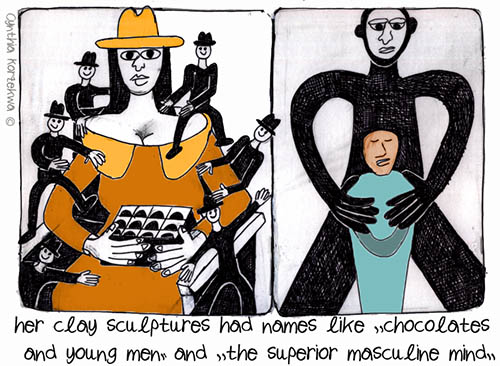 Read I SHOCK MYSELF by Beatrice Wood free online HERE on Archive.org

The Storyteller....
View all posts by Art for Housewives →
This entry was posted in Drawings & Paintings, People, THE DIARY OF LUZ CORRAZZINI and tagged Archive.org, Beatrice Wood, clay sculptures, Krishnamurti, Marcel Duchamp, One Line A Day Diary, THE DIARY OF LUZ CORAZZINI. Bookmark the permalink.

2 Responses to Beatrice Wood shocks herself