My mother had a knack for collecting unusual acquaintances. One such acquaintances was an English Lord who’d fallen madly in love with her while in Texas buying mustangs for his stables. Bertie, as she called him, insisted that we visit him in London.  And my mother, born for adventure, agreed. So we loaded our trunks with woolen underwear and silk blouses then departed. 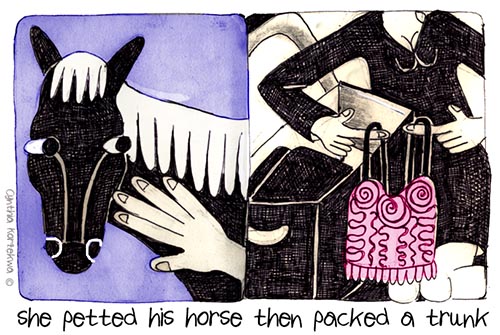 Bertie lived in the lovely area of Bloomsbury giving me the chance to go to Bedford Square every day to sketch. Sometimes I had difficulty concentrating on drawing because I was too busy looking at all the  peculiar  people.  One woman in particular caught my attention. Tall and haggard dressed in Typical Tweed, she had an intensity to her that wasn’t easy to ignore.  We saw one another every day in the square and soon began nodding our heads in recognition. Then one cloudy afternoon I saw her sitting on a bench crying. I didn’t know what to do as the Brits are known to be so formal and stuffy. But empathy took over and I went to her and, using the most discreet voice I had, asked if she needed help. Initially she gave me a glare but then burst into tears. She indicated the space next to her on the bench so I sat down as she wailed about how desperately sad she was. Her name was Virginia and she was a writer and part of an artistic group called Bloomsbury. Once she’d relaxed, just to liven the atmosphere, I showed her the sketches I’d been making. Virginia said they were delightful and invited me to her house for tea.

Virginia lived in a charming house on Gordon street that was always full of people.  The day I went for tea there was T.S. Elliot, a most unpleasant man,  the economist John Maynard Keynes, the writer with a view, E. M. Forester and Leonard, Virginia’s husband. Virginia seemed rather intimidated by another guest, Katherine Mansfield. I heard her gossiping with Elliot about Katherine. Virginia had called her  ‘a civet cat that had taken to street-walking’.  Quite rude of her, no? But later I was to learn that Virginia and Katherine had become the best of friends and regularly discussed their work and other writers while drinking tea and smoking cigarettes. Katherine said that the pleasure of reading is doubled when you can share books with someone else. 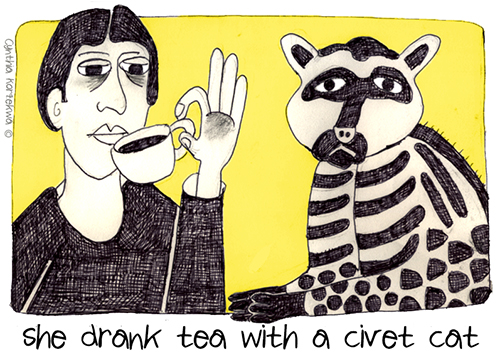 Virginia was a bit jealous of Katherine and I could easily see why. Even though both used interior monologues, they didn’t speak to themselves in the same way. The sea had already started to roar inside Virginia’s head whereas Katherine was coughing up blood. One retreated while the other expanded.

Katherine’s relationship with Beatrice Hastings, caustic critic of literature and just about everything else, also put stones in Virginia’s shoes. More than a literary competition, the jealousy stemmed from the intimate relationship Katherine had had with Beatrice before the latter moved in with Modigliani. I remember seeing one of Modigliani’s portraits of Beatrice and thinking, okay, another woman with a long neck and a pinched up little mouth.

Years later I would better understand both Katherine and Virginia after reading their diaries (is it okay for husbands to publish their dead wives’ diaries?) and how writing simultaneously regenerated and exhausted them. One day sinking, the next day swimming, they both struggled to make the inside come out.

Katherine died of TB in 1923. Haunted by her death, Virginia became quite needy and often invited me for tea.  On one occasion, Arthur Waley was there. Arthur was an expert in Japonism, the study of Japanese aesthetics. I, too, was an enthusiast due to my studies on Degas and his collection of Hokusai prints. 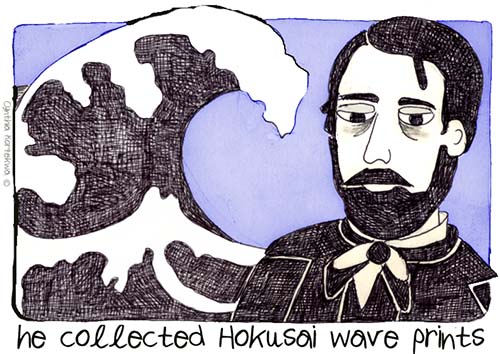 Arthur was shy but had the greatest range of friends of anyone I’d ever known…not just the artsy Bloomers but other writers such as Ronald Firbank, as well as politicians, spiritualists and Eskimo stuntmen. He was known for his translations of Asian literature including that of The Pillow Book.

When I think of pillows I certainly don’t think of books.  I think of sleep, of course, but also of magic rituals such as filling the pillow with herbs or, as taught to me by a curandera in Texas, sleeping with scissors and a photograph of someone you want to forget  under your pillow. It makes forgetting easier. Believe me, I know.

But in classical Japanese literature,  Waley told me, a pillow book is a kind of diary and the most famous one is that of Sei Shonagon (966-1017). Sei was a lady-in-waiting for Empress Consort Teishi in the Heian court.

Sei’s pillow book described her life at court, interesting events and her personal observations.  She was exceptional fixated with making lists.  She made lists like “Things that arouse a fond memory of the past”, “Things that cannot be compared”, “Things that should be large”, “Things that give a clean feeling”, “Things that are distant though near”, and” Deeply irritating things”. My favorite is  “Things that make one’s heart beat faster” that includes:

Sparrows feeding their young. To pass a place where babies are playing. To sleep in a room where some fine incense has been burnt. To notice that one’s elegant Chinese mirror has become a little cloudy. To wash one’s hair, make one’s toilet, and put on scented robes; even if not a soul sees one, these preparations still produce an inner pleasure. Plus, it is night and one is expecting a visitor. Suddenly one is startled by the sound of raindrops, which the wind blows against the shutters.

When Tesishi’s gig as an empress was up, Sei was forced to leave the court.  It’s not certain what happened to her but speculation is that she either became a Buddhist nun or died alone in poverty.

Umberto Eco also loved lists and often included them in his novels. If he were to be stranded on a desert island, Eco once said, he would want to have a telephone book so he could use the list of names to make stories. A narrative can be conceived as a list of events. Furthermore, said Eco, a list is the origin of culture because, to make infinity comprehensible, lists help create order. Cultural history is full of lists such as lists of saints, armies and medicinal plants, or of treasures and book titles. 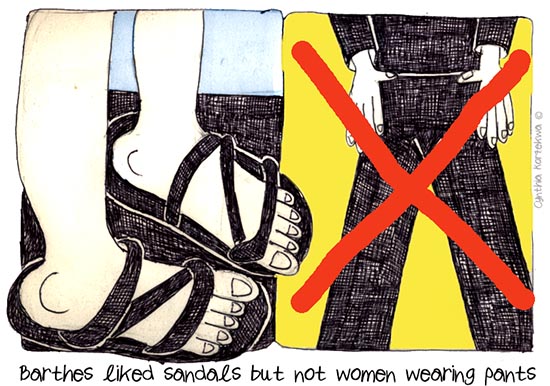 Not just history, but people as well like lists. In his book, Eco included Roland Barthes lists of likes and dislikes thus we know that Barthes, among other things, liked cinnamon, the smell of freshly cut hay, flat pillows, writing pens, Médoc wine, and wearing sandals while walking on paths in southwestern France. But Barthes disliked, among other things, white Pomeranian dogs, women in slacks, geraniums, TV cartoons, Mirò, and spending evenings with people he didn’t know.

It must have been around 1995.  I was teaching at the Academy of Fine Arts in Milano and taking advantage of the city’s cultural events.  One evening at the Feltrinelli near Brera, Eco was presenting one of his many books. After his talk, Eco was surrounded by adoring book groupies and, from the expression on his face, I could telling he felt bliss. Then his wife showed up pointing at her wrist watch saying “Umberto, Umberto, dobbiamo andare!” and his mouth went down like a landslide.  It reminded me of Nora, James Joyce’s wife, who asked her husband why he didn’t write books that people could understand. There’s nothing like a wife to keep an ego in place.

It was 2002. I was in Paris visiting Chloe and we were having lunch at a bistro near Quai des Grands Augustins.  Sitting next to us was a jaded looking woman oblivious to the world so intensely involved  she was in writing.  Chloe was, as usual, taking photos. After the mandatory selfies, she stepped away from our table to take pictures.  Knowing that, like the Mayans, I fear photographs can steal a part of the soul and imprison it forever, Chloe carefully avoided me as subject matter.

The Croque Monsieur was busting inside of me and I felt the need to get up and move. As we were walking away, Chloe in a whisper asked if I had recognized the woman who’d been sitting next to us. No, I said, who was she? Susan Sontag, she replied.  Well that in itself was curious but later in the day, Chloe downloaded the photos she’d taken.  We were amazed that, unintentionally, Chloe had not only captured Sontag writing but had photographed the notebook she was writing in as well. I’m ashamed to admit it, but I was very curious to read what Sontag had written and asked Chloe to enlarge the writing. Chloe was aghast that I could so blatantly invade someone’s privacy but, curious herself, she finally agreed.  What we saw seemed little more than lists in all their variations which was, I learned years later, basically how Sontag kept journals. A journal, she said, was like a confidante who is deaf, dumb, and illiterate. It gives you the possibility to express yourself but, more importantly, to create yourself as well.

I, too, make lists. You know, the Things to Do kind. Makings lists can be exciting because, without doing anything at all, just making a list already gives you a feeling of accomplishment even though, as in my case, you rarely bring intention towards a conclusion. 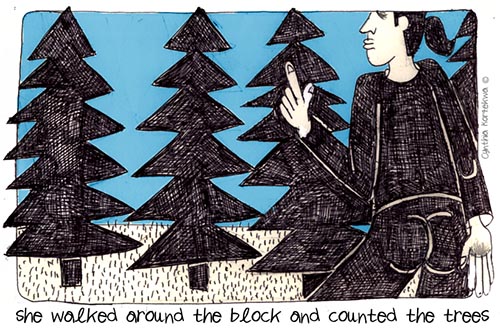 Inspired by the lists of others, I’ve tried giving a new twist to my own Things to Do ones.  Instead of writing things like: pick up the laundry, buy milk, pay the light bill, and mend the sheets, I’m going to experiment with a new kind of Things to Do such as: