Posted on February 7, 2018 by Art for Housewives

It was our first night together in the big room with a little bed on via Garibaldi.  Nick Cave and the Seeds provided the background music.  Hugh found it all so poetic but, to tell the truth, Nick kinda unsettles me.  There’s always that deflating element of sadness and tragedy.  Take, for example, The Weeping Song where a father tells his son to go to the water to see the women weeping then to go to the mountain to see men weeping, too.  The women are weeping for their men and the men are weeping back at them. So many tears that have nowhere to go. 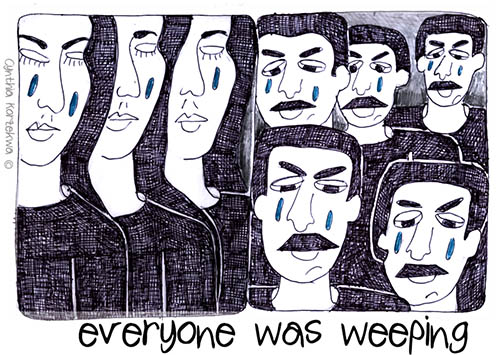 What I do like about Nick Cave is his handwritten dictionary. It’s like a loose leaf address book but instead of names and numbers, it has words and their definitions. Words like amuck, avouch, and avast. Or  murk and mort and moot. I also like his Weather Diaries.  Well, actually, I’ve never read them but I do like the idea of writing a diary based on weather.

Nick is from Australia but moved to London. That could explain his concern with the weather. I mean, he’s got a skylight in his home and is forced to see the sky crying all the time. The only thing, he said, that gave him hope was spring but one year spring let him down. It depressed him and, as many of us know, there’s nothing like depression to make you start a diary. That’s when Nick began documenting the weather. He bought a trendy little notebook and a rubber date stamp. Everywhere he went, he’d jot down the fluctuations in the weather and soon began to prefer bad weather to good weather because it gave him more to write about. The intention was to write about the weather for  a year then publish the diary.  But the birth of his twins changed all that. However he did conclude that “I can control the weather with my moods.  I just can’t control my moods.”

We all know there’s a relationship between weather and mood.  Even Stefano of Dolce & Gabbana said “I love the Weather Channel because my mood changes a lot according to the weather!” That’s why I was somewhat surprised when Hugh said he wanted to go to Bordeaux to meet Montesquieu, the philosopher who’d become famous for his theories on how  climate influences people and the society they live in. His theory was that people coming from warm climates tend to be passionate yet laid back when it comes to work whereas people from cold climates have rigid personalities but a stronger work ethic. Well of course! If I know it’s going to freeze during the winter, I’m going to work my butt off to prepare for the cold. But if I live somewhere where the sun always shines, I’m going to spend my days on the beach in a red bikini! Really now, it always amazes  me how men can write about the obvious and call it philosophy.

My friend Mona had rented a villa in Bordeaux and immediately organized a big fête with liters of Château Margaux. That’s where we met Montesquieu and his wife, Jane. I was dying to ask her what she felt about her husband’s belief that women were not equal to men and, being weaker, should obey their husbands. But Hugh, afraid that the wine had unleashed my tongue, quickly led me away. Peccato, I said to myself, that Hugh didn’t know about The Champion of the Weather.

Even a block away you could see that big lusty magnolia tree on South Presa Street where my best friend Laura lived. Every Sunday morning I’d go to her house for coffee and pie. Sometimes her neighbor, a writer named William, would be there, too.

Will, as we called him, had a terrible cough. He’d moved to San Antonio hoping the climate there would dry out his lungs.  Laura and I truly enjoyed his company because he always told us interesting stories with unexpected endings.  Unfortunately, Will had the bad habit of touching Laura’s magnolias and making them turn brown.

San Antonio had a good effect on both Will’s health and his writing. But, afraid of collecting dust, Will was always on the move. Luckily, he was a writer and often sent letters. That’s how we knew  he’d moved to Austin, was married and working in a bank. Pity that Will was good with words but lousy with numbers. After being fired for missing funds, Will fearfully ran off to Honduras but was forced to go back to the States when he learned of his wife’s illness. Arrested for embezzlement and sent to prison, he took advantage of his free time to develop his writing skills. It wasn’t long before Will was sending short stories to publishers. Afraid no one would publish them if they knew he was a convicted felon, he used the pen name O. Henry.

Once out of jail, Will moved to New York but came back to San Antonio one summer for a  visit. Like old times, we sat at the kitchen table for coffee and pie.  Laura and I pretended not to notice when he’d whip out a flask of bourbon to spike his coffee. Such a waste of time, too, because  his stories were such a hoot  that we would have given him all the bourbon he wanted just to keep him talking. 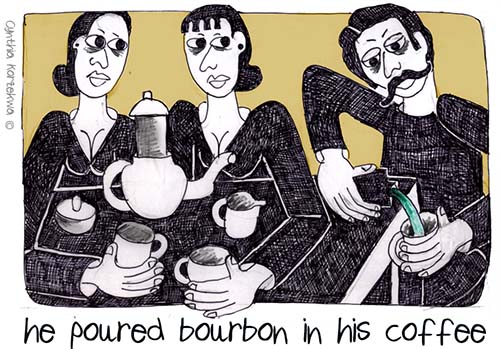 When we asked Will what it was like to live in New York, he replied that it was a great place for his writing career.  But making friends was difficult as New Yorkers were generally aloof and distant. To give us an idea, he told us the story of Bud or, as Will called him, The Champion of the Weather.

Bud, a man who enjoyed the pleasures of sociable vocal intercourse, never had had any problems  striking up conversations with strangers until he went to New York. Trying to converse with a New Yorker on the street, he said, was like talking to a lamp post. 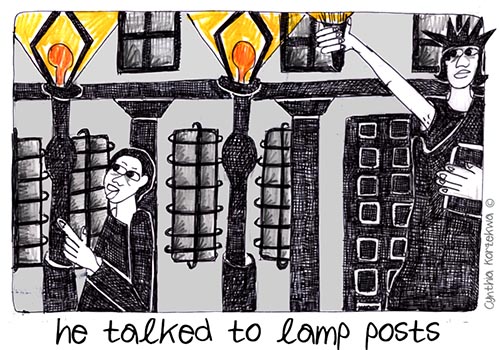 He frequented the same café and was quite surprised one evening when the manager came up to him and said “‘Nice day!”  Bud, hungry for dialogue, immediately  started talking but the manager just turned his back and walked away.

Bud was incensed. A few days later, he went back to the café with the intent of  giving the manager a lesson in the art of continuous conversation. He cornered the manager and showed him his pistol before calling  him something like a frog-hearted muzzled oyster. The manager, fearing for his life, forced himself to make small talk. Satisfied, Bud told the manager to go back to his job but warned him to keep his hands off the weather unless he was ready to follow up in a personal manner.

So why is talking about the weather so important? Because the weather affects us all. Knowing we have something in common shortens the distance between us.

So have a nice day!

The Storyteller....
View all posts by Art for Housewives →
This entry was posted in Drawings & Paintings, THE DIARY OF LUZ CORRAZZINI and tagged ballpoint pen drawing, Dolce & Gabbana, Nick Cave, O. Henry, THE DIARY OF LUZ CORAZZINI, Weather Diary. Bookmark the permalink.