The Burden of Beauty

Frederic Leighton was an English artist who followed his own shadow looking for a direction to go in. Maybe it was because he was still very young but I had a feeling it was because he was ambiguous within.  In fact, one evening while a group of us were drinking wine at Il Pincio, Leighton spoke of “that other strange second man”  living inside of him.  And maybe to keep from exposing his doppelgänger,  Leighton sought shelter in the penumbra. 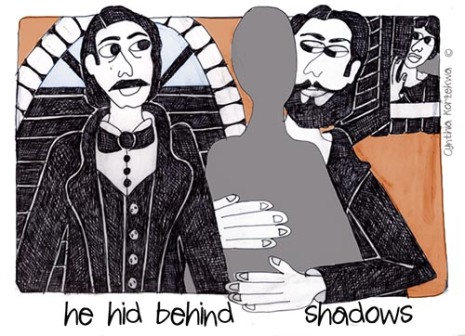 Our Wednesday Morning Reading Club routinely visited the studios of other artists out of solidarity but also out of curiosity. That’s why one morning we showed up at Leighton’s studio on via della Purificazione.  He was busy painting his model, Nanna Risi, a cobbler’s wife from Trastevere. Nanna was dressed all in white with peacock feathers stuck in her hair.  Leighton generally dressed his models in period costumes as he used them for mythical or historical figures.  But not Nanna.  Her looks were so intense that she easily became her own subject matter.

Because of her haunting beauty, many artists of the expat group used Nanna as a model.  Then in 1860, she posed for Anselm Feuerbach and all the equilibriums were disrupted.  Feuerbach became obsessed with her and fell in love with this obsession.

He convinced Nanna to leave her husband and child to run off with him. For a few years the couple lived as lovers but the thrill eventually wore off.  Feuerbach saw her mainly as a model (he painted her over 20 times).  But Nanna didn’t live in a painting.  She was a woman in the real world and wanted to feel like it. So when a rich Brit courted her, she dumped the painter only to be dumped herself a few months later.  Nanna tried going back to Feuerbach but his wounded ego was done with her. Aged and rejected, artists now rarely asked her to model. So, in great economic difficulty, she took to begging in the streets.

One afternoon a few years later, I was walking down via del Corso when, from a distance, I could see Nanna panhandling. She was shaking her cup when Feuerbach walked by.  Instead of stopping to say hello, he simply waved and walked on. The expression on Nanna’s face broke my heart as she obviously felt humiliated. Well, I’m a firm believer in female synergy and solidarity.  So, with studied nonchalance, I bumped into her and, acting really surprised, said “Oh Nanna, what a pleasure to see you again!” then invited her to my house for a coffee.  Once home, I filled her with all the food I could find in the kitchen along with some wine and waited for the in vino veritas to take effect.

There was something about Nanna that really touched my soul. I asked her if, for money of course, she’d let me sketch her. So while she talked, I drew.

If I could give a name to Nanna’s story, it would be “The Burden of Beauty”.  Beautiful women tend to be objectified by men who are attracted to surface and rarely make the effort to comprehend substance.

Poor Nanna. She was a shipwrecked beauty without family, without money.  Being an object of desire had been, for her, a terminal experience. Since you can only desire that which you don’t have, a desire is just a void waiting to be filled. And once the void is filled, the desire disappears.  In other words, once Nanna succumbed to a man,  she immediately became obsolete.

A few hours later after much wine and many sketches, Nanna left and I never saw or heard from her again.

(excerpt from The Roman Diary of Luz Corazzini ©)

p.S.  the Italian model  (modèle italienne) in the academic tradition…  the archeologist and later conservator of the Louvre Museum  of Antiques,  Leon de Laborde, was enthusiastic about Italian models and encouraged using them. In the 1850s, many Italians moved to Paris during the Second Empire.  Because of their physical characteristics (as noted in Renaissance paintings), Italians became  very trendy as models.

Anselm Feuerbach was friends with Johannes Brahms who composed la Naenia to commemorate his death.

Feuerbach was part of the group of German artists living in Rome known as Deutschrömer.

4 Responses to The Burden of Beauty