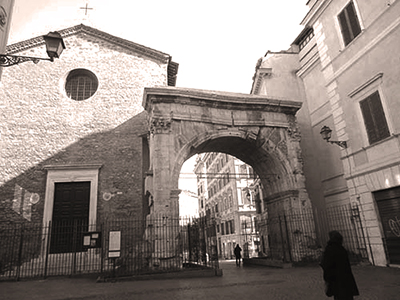 On via San Vito in Rome, sandwiched in between two buildings, is the Arch of Gallienus. Originally intended as a gateway to the city of Rome,  it was later recycled as a monument to Emperor Gallienus. Gallienus was Emperor from 253 to 268. But it was an unfortunate reign as the Roman Empire began to crumble. Gallienus had proclaimed himself Emperor of Milan and during the siege to take over the city, he was stabbed to death.

Gallienus was married to Cornelia Salonina. Being the wife of an Emperor, Cornelia‘s profile was put on many coins. But these coins meant nothing as she watched her husband die.  More than likely, she, too, was murdered afterwards.

The Storyteller....
View all posts by Art for Housewives →
This entry was posted in JOTS, Rome/Italy and tagged Arch of Gallienus, Cornelia Salonina, Emperor Gallienus. Bookmark the permalink.