Why Keep a Journal

Posted on January 3, 2020 by Art for Housewives

In “On Keeping a Notebook”, Joan Didion writes that she was just a child when she began keeping a journal. Her mother had given her a Big Chief tablet and told her, instead of whining, to amuse herself by writing down her thoughts. Joan amused herself so much that she kept on writing. 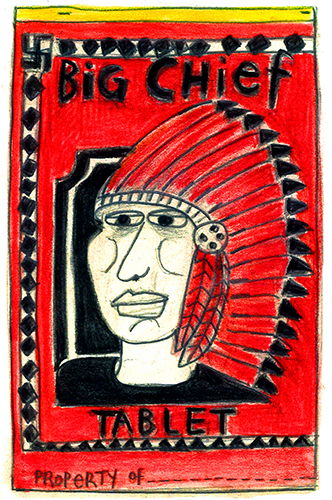 Joan explains that she is not interested in recording the day’s events because she finds this boring and meaningless. She prefers a journal that mixes what happened with what might have happened.

The way we write about things in our diary is how we will remember them. Memory affects our psyche (and our psyche affects everything), so if we could learn to write about what has happened in a poetic way, we could make our lives read like poetry. Like Joan, we could whine less and amuse ourselves more.

Joan wonders if the need to write about others is indirectly minimizing ourselves. For me it’s the contrary. Writing about others is like suiseki, the Japanese art of stone collecting. It’s the talent of finding something extraordinary in the ordinary. For example, if the essence of a waterfall can be seen in the particular shape of a rock, the rock is collected and then displayed in such a way as to give it artistic autonomy.

Of his ready-mades, Duchamp said that he’d simply tried to create a new idea for an object that everybody thought they knew.

I would love to keep a diary with a suiseki spirit and, like a talent scout, discover a special story in the people around me. By writing about others, we orbit less around ourselves and give our inner world a rest.

A diary can be seen as a rough draft for a book entitled “The Way I Used To Be.” That’s why rereading old diaries makes me uncomfortable. I no longer identify with the person who wrote them because I’ve changed so much. But that’s one of the main reasons we should keep one—so that we can see that change and understand that, even still, we’re in constant motion.

My mother told me that I cried on my first day of school because I was afraid of being ridiculed for not knowing anything. My low self-esteem had me focused on how little I knew instead of focusing on how much I was going to learn. Diaries are the opposite. You think you know everything about yourself. Then you reread a diary from the past and the you from your past seems like a stranger.

P.S. It’s interesting to note that the swastika is depicted on the Big Chief tablet as it was a motif commonly found in southwest American Indian designs. The swastika dates back thousands of years but all it took was one powerful dictator to change its meaning forever.

“On Keeping a Notebook” by Joan Didion free pdf HERE.

SLOUCHING TOWARDS BETHLEHEM, a collection of essays by Joan Didion can be read via Archive.org HERE.

2 Responses to Why Keep a Journal