The non-stop drumming of the drizzling rain is giving me a headache and making it quite difficult to read Martha Gellhorn’s biography. So I am skimming the pages looking for somewhere to land. Biographies that offer only embellished chronological events nerve me out. I am at an age where I’m no longer willing to spend time on things that don’t interest me. 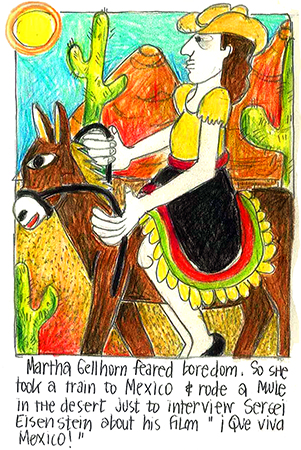 From the biography it seems Martha had a yoyo within that kept her bouncing from the desire to be alone from the desire to be in the company of exciting personalities who wouldn’t bore her. One of her many escapes from boredom found her, without passport, vaccinations, or knowledge of Spanish, on the Missouri Pacific Railroad headed towards Mexico. This terror of boredom made her audacious enough to ride a mule into the desert to interview Sergei Eisenstein about his film. And, in Mexico City, to climb a scaffold to meet Diego Rivera and to ask him about his murals. Martha was impressed that a man of “gargantuan proportions” could have such delicate hands. Being an artist, she wrote, was the “least stuck in the kitchen life” she could think of. Rivera’s blue polka-dotted shirt and his chortle laughter intrigued her. But Martha was not the only American writer who’d been charmed by Rivera. 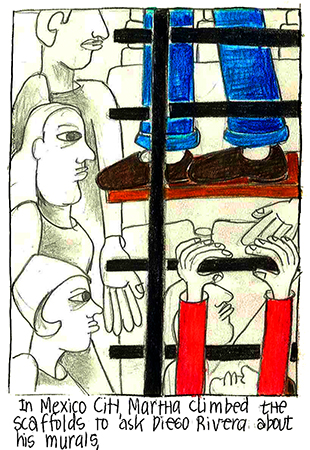 For 10 years, Katherine Anne Porter had periodically called Mexico home but had finally called it quits with her second homeland just as Martha was arriving. At the end of the Mexican Revolution, Katherine, with great enthusiasm, wrote about the new Eden. Unfortunately, sometimes we travel hoping to find what’s missing at home and this can lead to expectations impossible to satisfy. Disappointed, Katherine saw the same old thing—who doesn’t have power wants it and who has it wants to keep it.

During her period of enthusiasm, Katherine was a kind of art groupie and would help Rivera grind his paints. Rivera, whose ego was as big as his murals, would often say of a woman “she mixes my paints” to indicate that she was his mistress. Once Katherine understood the extent to which Rivera orbited around himself, her enthusiasm waned, and she included him in two of her short stories, “The Lovely Legend” and “The Martyr” (the latter blatantly has Rivera in the role of Ruben who gets dumped by his muse as happened in real life when Lupe Marin left Rivera for Jorge Cuestas, the poet who later castrated himself).

It seems Rivera may have gotten his revenge. In a mural panel known as “Touristic and Folkloristic Mexico”, a blond woman who resembles Katherine is at the top of the panel representing an American tourist. The panel is a criticism of those who come to visit Mexico in search of folklore when they themselves are more folkloristic than anything Mexico has to offer. 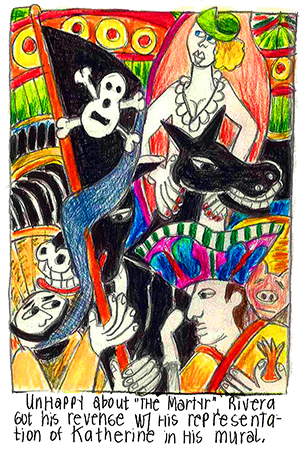 When Martha met Rivera, she was only 23. Rivera at the time was married to Frida Kahlo, just one year older than Martha. But Martha makes no mention of her. Pity as the two had common fates. Just as Martha would later resent being known only as Hemingway’s wife, Frida already resented being known only as Rivera’s wife.