Even though the fan was going full blast, I was suffocating.  It was a night in June of 1963 and I was in Jackson visiting my friend Eudora.  There’d been much tension in town due to the demonstrations. Nerves were so frayed that their fibers easily tangled.  Eudora and I  were watching TV when we saw the news about Medgar Evers, a civil rights activist who protested against segregation.  I’d seen Medgar in town a couple of times.  He was a nice looking man who walked with his shoulders held high.  But his furrowed brow gave him away.  I knew from Darwin’s book on facial expressions that that corrugation meant only one thing—Medgar was chronically stressed out.  I would be, too, if the KKK were threatening to kill me.

Medgar and his wife, Myrlie, feared for their family. But fear offered them no protection.  Just a few hours after JFK’s Civil Rights Address, Medgar returned home from a meeting only to be shot in the back before arriving at his front door. His wife rushed him to the hospital and was told that blacks were not admitted. Maybe fearing retaliation, they finally took him in but it was too late.

The news of Medgar’s death devastated Eudora.  She cried and cried until her eyes looked like muffins. Then she went to her bedroom and closed the door. The next morning, while I was sitting at the kitchen table drinking coffee, a ragged Eudora walked over to me and handed me a bundle of densely written pages.  It was the draft of her short story ““Where Is the Voice Coming From?” 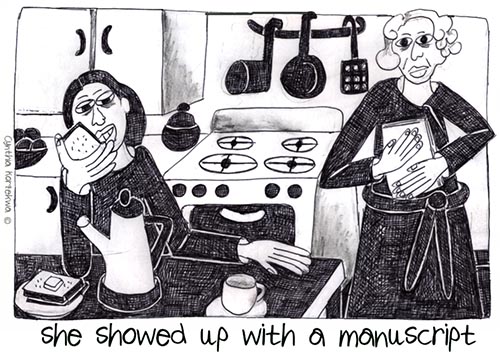 Eudora told me that after  initial outrage and sadness, she felt bewildered as she couldn’t comprehend such deprivation. Why would someone gun down another human being in such a vile and cowardly way?  Needing to understand, Eudora tried entering the mind of the murderer and did so by having him be the narrator of her story, a story about a white man who needs to believe that he’s better than blacks. Because the idea of having someone inferior to him is the only thing that gives him status.

Writing had calmed her down some but Eudora continued to be depressed so I decided to prolong my visit–sometimes having someone around who’ll listen to you express your pain is better than valium. We spent the next three days talking non-stop taking breaks only to make meals. Eudora even made a crabmeat casserole and served it with bourbon and water.  The bourbon made us giggle and talk even more.

Eudora came from an intelligent and warm southern family. But her sheltered life didn’t keep her from being daring. And empathic. Before writing stories, she listened for them. Listening for a story is not the same as listening to a story. Listening for a story is an awareness that stories exist and you just have to be ready to pounce on them when they appear. Like waiting for a mouse to come out of its hole.

Early on, Eudora got a job as a publicity agent for the WPA which gave her the possibility to travel around and take photographs. It was photography, she said, that taught her how to write.

A good snapshot keeps a moment from running away. Because life doesn’t hold still, to capture transience, you have to be ready at that crucial moment. Like a photographer, the writer must stalk his existence.  And when that existential truth appears, he must follow it in its tracks until a story worth telling is constructed.

Storytelling is  a form of perception.

In 1936, Eudora exhibited her photographs in New York next to the Julien Levy Gallery featuring Surrealists. Mesmerized, she bought the catalogue Fantastic Art, Dada and Surrealism and even experimented with surrealism in her writing. In an issue of the surrealist magazine View, she saw a reproduction of Joseph Cornell’s A Crystal Cage, and was so impressed that she wrote him a fan letter. Cornell, in turn, wrote back stating his admiration for her short story “The Winds” and even sent her a collage that she hung in her dining room.

When Eudora was about 28 years old, she met Katherine Anne Porter.  Apparently the outwardly shy Eudora and the glamorously animated Katherine had nothing in common save for their interest in Jane Austin, Virginia Woolf, and the idea that a good short story was a journey towards self-awareness. But after meeting in the mid 1930s, they knew they were kindred spirits. And when the two spent a couple of months at an artists’ colony in upstate New York, they got little work done. Eudora taught Katherine how to drive and the two roamed the countryside enjoying what women love so much—companionship. 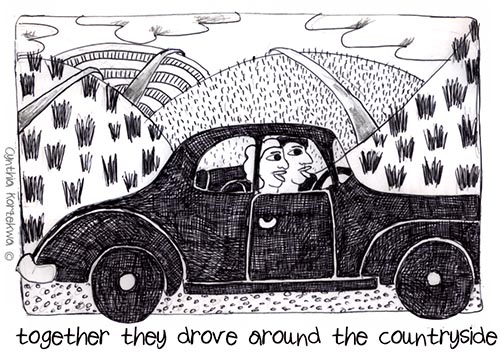 Katherine, like me, grew up in Texas. Her mother’s death when she was only two inaugurated a troubled childhood. For years she bounced around people and places.  In 1920 the magazine she was working for sent her to Mexico to write about the current political situation. Her experience with Diego Rivera and the Viva La Revolution lifestyle inspired several  short stories.

Both Katherine and Eudora created characters inspired by people they’d met. Both were keen observers of the élan vital. When I asked Eudora what makes people the way they are she replied: “People are mostly layers of violence and tenderness wrapped like bulbs, and it is difficult to say what makes them onions or hyacinths.”

One evening Eudora and I ran out of bourbon so our conversations became more anchored. I asked Eudora about Delta Wedding, a story set in 1923 evolving around the Fairchild family and their southern lifestyle. Why was the character, Shelley, so fixated with writing in her diary?

Reading, explained Eudora, opens doors but writing gives you wings. It’s a form of emancipation and Shelley, who doesn’t want to end up like her mother, uses her diary to set herself free. Sitting on her bed dressed in her pajamas, she initially uses her diary for daydreaming. But when she starts to use  her diary as a tool for self-examination, Shelley learns to fly. The diary makes her world bigger and gives her a personal space she can’t find at home or in her milieu.

But, confessed Eudora, it took a pincushion to write Delta Wedding. Her writing method was basically that of eavesdropping on conversations then taking notes on what people said and how they said it. These notes made it ever so easy to write a short story but writing a novel was much more complicated. So for Delta Wedding,  Eudora would type a chapter then spread the pages out on her bed.  If a paragraph or sentence seemed out of place, she would cut it out and move it around. Then, once she’d clipped  and moved all that was necessary,  Eudora would fix everything into place with straight pins then re-type the new arrangement. Like Jane Austen, she used straight pins to edit her manuscripts. 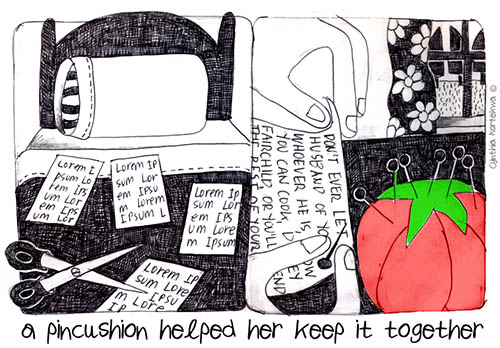 I told Eudora that this seemed like a very time consuming process to which she replied: “it doesn’t matter if it takes a long time getting there; the point is to have a destination.”