Day 7 of the Lockdown

Would you believe that, for yesterday’s balcony gig, I washed my hair, put on makeup, squirted on some perfume, and wore my biggest pair of silver earrings? Having been confined to my home for a week, I considered it a real social engagement so dressed accordingly. 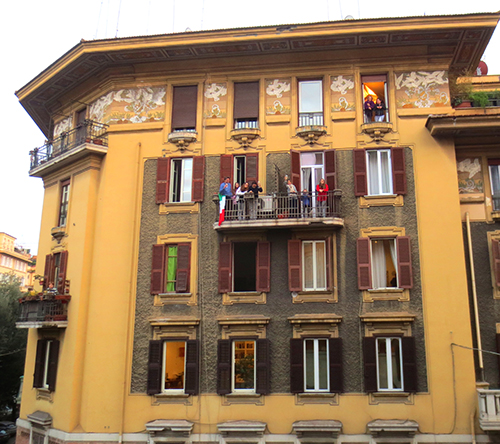 Above, my across the street neighbors participating in the balcony singing of “Azzurro”. Afterwards they opened up a bottle of wine and shared a toast lifting their glasses up to me as well. 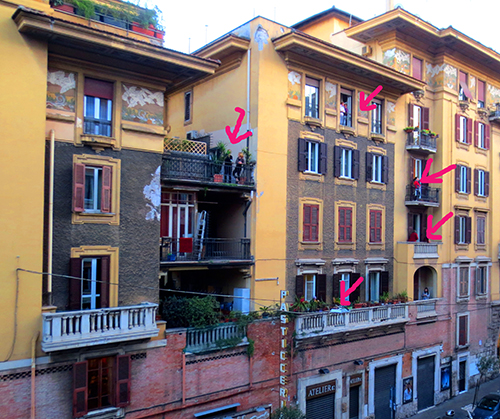 The balcony has become a stage for singers and musicians in all of Italy. But it’s now being used for striptease and bingo games as well. Italians need contact with others. People in the cities live in condominiums making this contact easier. But, in the USA with the Little House on the Prairie lifestyle, the awareness of others is acknowledged in another way. There’s less of an awareness on just how much we need each other.

Fratellanza (fraternity) is not just a word but a spirit that I’ve never experienced as much as I have this past week. And we need to continue with Synergy and Solidarity—in Italy, yesterday the death count was 366. In Bergamo there are so many dead that they don’t know where to put the bodies. (If you can stomach it, a film of coffins in Bergamo here). But some good news–at the Spallanzani in Rome, 316 patients were dismissed.

The peak is expected to come March 18th. After that, the country will have a better idea of the situation. Lockdown, it seems, is to continue until April 3rd.

A positive effect of the lockdown—as with China, a major drop in pollution (northern Italy had truly toxic air) and the canals of Venice, once murky, are now transparent.

Doctors from Cuba are arriving in Italy to help out bringing with them Interferon Alpha 2B, a powerful method used in the treatment of coronavirus.

In Naples, it’s been discovered that a drug (tocilizumab) used for rheumatoid arthritis has been helpful for extreme cases. The company that produces it, Roche, is offering to give it away where needed. Quite a different attitude than that of Trump who, according to the German Health ministry, has offered mucho $ to the German pharmaceutical company, CureVac, to buy a possible vaccine to be used only in the USA and to be in the hands of Trump himself. Well, despite our “brotherhood” as part of the European community, I don’t know what to expect of Germany. Italy needs about 100,000 masks and ordered them from a company in Germany. But, up until yesterday, the Germans blocked them in customs. Why? Germany claims to have only 11 victims from the COVID-19 so why the need to hoard?

And my fellow Americans, beware. Around 80% of pharmaceuticals sold in the USA are produced in China.

The World Health Organization praises how Italy is responding to the pandemic. Hans Kluge, regional director of WHO Europe, tweets that “Italy has taken a brave decision to contain & mitigate the risk of #COVID19 for its population” and that “Italy’s decisions will protect other countries. Only with people’s participation & resilience the battle will be won.“  source: L’Oms loda le iniziative dell’Italia: «Proteggono tutto il mondo»

As reported by the Guardian, the Public Health Dept. of England expects that “UK coronavirus crisis to last until spring 2021 and could see 7.9m hospitalised”…in other words, four out of five people will probably contract the virus. British people over the age of 70 have been told to stay indoors for four months!

If I were living in England, I would be afraid. The Health Dept. predicts 80% of the population will get the virus and at least 318,000 will die. Source: Coronavirus, il rapporto shock della Sanità britannica: “L’80% della popolazione sarà contagiato e ci saranno almeno 318 mila vittime”

Italians looking out for their own… Italians stranded outside of Italy will never get the care and attention they would here in Italy.  “Alitalia comes to the rescue of thousands of Italians unable to fly home. The Italian ministry of foreign affairs is co-ordinating a series of special flights, operated by national flag carrier Alitalia, to repatriate thousands of Italians stranded abroad due to travel bans over the Coronavirus outbreak in Italy. On the night of 15 March a plane left Rome for the Maldives, stopping off in Cairo to change crew in order to respect the ban on Italians from entering the Maldives.” These Italians, once home, will be put in quarantine for 40 days.

Yesterday’s irritation: The Pope, with at least four bodyguards, decided to leave Vatican City to pray at the church of Santa Maria Maggiore tranquilly walking the streets of Rome. Although in general I like this Pope, I think his action showed a total lack of respect towards all the Italian forced to live in isolation, towards those Italians who have to have a permission slip just to go to the grocery store. The Pope is a resident of Vatican City and not of Rome. He broke the law. If the Pope wants to help, he can have the Catholic Church donate money esp. considering that they are one of the richest churches in the world. Or at least they could start paying taxes. I’m an Italian citizen and a resident in Rome. The people out on the streets directly affect my health. The Pope recently was sick with flu symptoms. Why should he be able to walk around while I have been confined inside for a week?

The Storyteller....
View all posts by Art for Housewives →
This entry was posted in Art Narratives, Lifestyle, Rome/Italy and tagged balcony singing, coronavirus. Bookmark the permalink.

2 Responses to Day 7 of the Lockdown