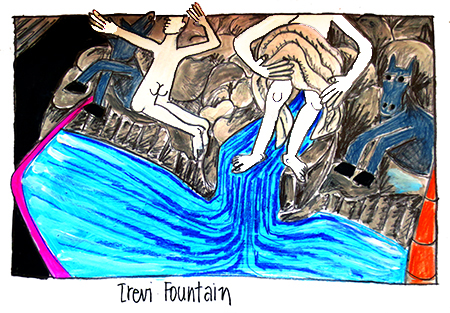 After the lockdown in Rome, photographs taken mainly by drones began appearing on internet showing a deserted city. One photo that got my attention was that of two vigili (city policemen) taking a selfie alone in front of the Trevi. There was something very tender about the photo as if these two vigili understood the uniqueness of being alone in front of one of Rome’s most important monuments and wanted to immortalize it.

Trevi Fountain is the oldest Roman water source and dates back to 19 B.C. The fountain was built at the end of the Aqua Virgo Aqueduct where there was the junction of three roads, “tre vie” thus “Trevie” then “Trevi”.

In 1730, Pope Clement XII commissioned the fountain’s remodelling. The architect who designed it, Nicola Salvi, died before the fountain was completed as it took 30 years to finish it.

The protagonist of the fountain’s sculptural composition is Oceanus, the god of the earth’s fresh water. The fountain uses tons of water that it reuses to sustain itself.

The film Three Coins in the Fountain made making a wish and throwing a coin into the fountain popular with tourists. The coins are collected regularly by Caritas, a Catholic charity, that uses the money for worldwide food and social programs. It’s estimated that c. E3,000 is collected daily or rather was before the lockdown.

In 1996, the fountain was draped in black after Marcello Mastroianni who, thanks to the film La Dolce Vita, helped make the fountain more famous than ever. (You can read more about Marcello here: Vieni, Marcello, vieni!) 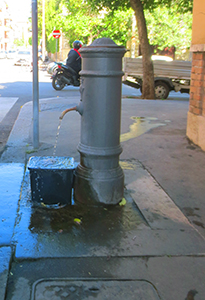 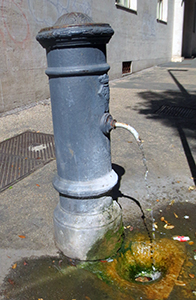 Although it may seem like a waste of water, it’s not. The nasoni are used as ventilation valves for Rome’s water system. Plus the constant flow of water keeps water from stagnating in the pipes as this would produce bacteria. More water is lost from leaky pipes than from the nasoni.

If there’s a lesson to be learned from the nasoni, it’s that flow prevents stagnation.

The Storyteller....
View all posts by Art for Housewives →
This entry was posted in Art Narratives, Rome/Italy and tagged flow, Living the Lockdown, Marcello Mastroianni, nasone, Oceanus, Trevi Fountain. Bookmark the permalink.

3 Responses to Keep Your Fountains Flowing