On my way to and from the beach at Livadia, I pass near a spice shop, με τη σεσουλα (“with the scoop”), which sells many spices and herbs predominately from the island. And, having a weakness for spices, I try to be very disciplined and walk  by without going in but am not always successful.  So, on one of my non-successful days, I walked in and bought a bag of dried St. John’s Wort as well as some dried wormwood. Wow.

με τη σεσουλα (across from The Ancient Cemetery)

I’ve already written about how much more I dream while on Paros (HERE) and that was before The Wort.  Now, if you go on internet and look-up St. John’s Wort, you will find that it is often used as an anti-depressant.  Luckily, I’ve never had the problem of chronic depression. But I must admit that in the past 3 years, I have had much anxiety in terms of the future.  And it’s not psychological as much as it is just Common Sense. The world is getting spOOKier and spOOKier every day with or without my participaton.  Of course I worry about myself, but my main consideration is for my kids—will they be able, in the future, to have an income and will they be able to have water.  In other words, will they be able to survive. So, with this in mind, I bought these dried leaves and made myself a tea. That night I had a dream so intense that I still remember it. This caused me to go back to the net and look up The Wort in terms of dreams to understand what had animated my animation.  And apparently, St. John’s Wort stimulates Vivid Dreams.  Many people are into Lucid Dreaming, the awareness that you are dreaming. Not me.  When I go to bed at night, all I ask for is a good night’s rest and not something else to think about.  Many years ago, I did some dream analyzing where I had to wake up every morning and immediately write down my dreams before I forgot them.  What a stress! But one dream in particular gave me needed information.  And another time a dream told me where to look for a pair of lost earrings and I found them. But what the real purpose of dreams is we will probably never know.

Dreams are thoughts in disguise. 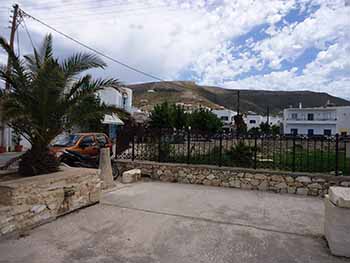 Walking to Livadia for my swim, I also pass by the Ancient Cemetery (above fotos) which faces the sea.  Excavations there revealed some of the most important Aegean funerary monuments dating from the 8th cen. BC until the 3rd century AD.

p.s.  Jo of Cranky Ceramics sent this link regarding the use of St. John’sWort while taking medications

The Storyteller....
View all posts by Art for Housewives →
This entry was posted in Paros and tagged Ancient Cemetery of Paros, lucid dreaming, St. John's Wort, vivid dreams. Bookmark the permalink.

2 Responses to Spicy Dreams on Paros