Standing in the wind with a charm bracelet

Posted on December 9, 2013 by Art for Housewives

Anna Akhmatova was a Russian modernist poet.  Her work was condemned by Stalin but, nevertheless, she remained in Russia.  This meant living in the shadows, experiencing the execution of her husband and grieving for her son forced to live years in a gulag.

But isn’t that what poetry is all about—transforming sorrow into art?

It is said that Anna, like Socrates, didn’t believe in writing her thoughts down (mainly out of fear because her poetry had been banned). So her poems, instead of being written, were memorized. But, luckily, someone took notes and wrote them down otherwise we wouldn’t know about “Under Her Dark Veil”, a poem that speaks of a love that’s lost its way. She calls out to him “if you leave, I’ll die” and he responds “Don’t stand here in the wind.”

“Don’t stand in the wind” (computer drawing by korzekwa)

The wind cannot be seen but can be felt. It’s a noun that likes to be a verb.

“Psithurism”, a word now obsolete,  means “the sound of rustling leaves”.  It comes from the Greek word ψιθυρίζω (psithurizō) meaning “I whisper”.

This bracelet does not make noise but it does whisper.  It is made from many materials exiled together to create a community:  strips of an old t-shirt crochet into a band, scraps of fabric covered by scraps of fabric to create beads, seams from ripped clothing to created links and soda cans cut into small disks to create paillette sequins.

Like the wind, this bracelet is a noun that wants to be a verb. 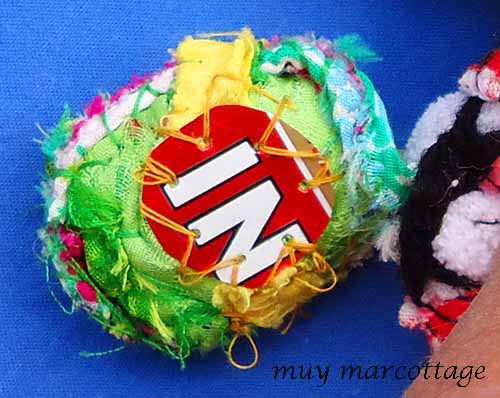 6 Responses to Standing in the wind with a charm bracelet