Posted on October 7, 2015 by Art for Housewives 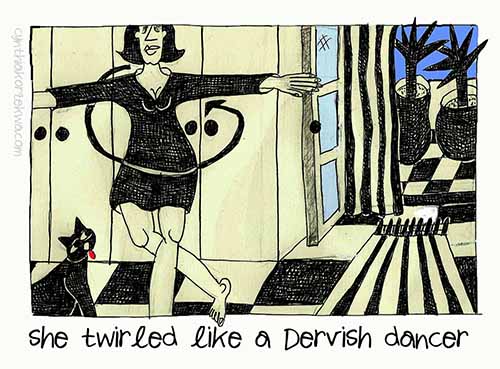 This morning I woke up determined to be faithful to my general  fitness program which includes raising my  vibratory level.  So, like an amateur Dervish dancer, I did the twirling around as describe in the  Five Tibetan Rites of Rejuvenation before going for my daily walk towards Krios.

Once near the promontory, I took out a pair of nail clippers to cut off some helichrysum. While I was bent over clipping away, I got the impression that someone was watching me. Fearful that maybe cutting plants was not permitted, I jerked myself up and saw a strange creature staring at me.  Even though I was startled, I noticed something familiar about this strange being.  He could see that I was afraid and said not to worry, that he was just a tourist curious about local customs.  Was cutting helichrysum a typical Parian activity he asked?  I explained that helichrysum was a medicinal plant with beneficial anti-inflammatory properties and cutting it was an activity typical of me and not of  Parians.

Seeing that I had relaxed and now felt comfortable with his presence (what woman isn’t happy when listened to?), he introduced himself. He said his name was Mick the Martian and, being so far away from home, he felt lonely and in need of a friend.  So I gave him my phone number and told him maybe we could get together sometime for a cup of coffee.

The Storyteller....
View all posts by Art for Housewives →
This entry was posted in Drawings & Paintings and tagged Five Tibetan Rites of Rejuvenation, helichrysum, Mick Jagger, Mick the Martian, Paros, the Martians are coming. Bookmark the permalink.

1 Response to Mick the Martian