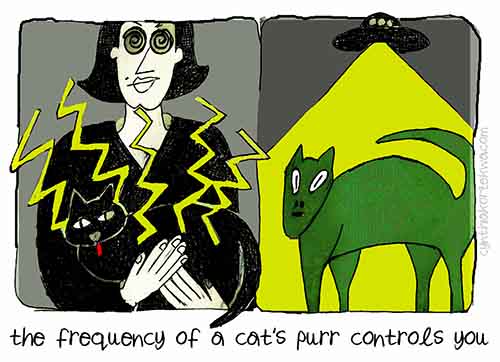 Have you noticed how cats just seem to stare into empty space apparently seeing something you can’t see? And have you ever noticed how the pupils of their eyes are always changing shape as if their  eyes have built in spy cameras? Well, it’s because cats are aliens!

Their purrs have frequencies used for mind control.  That’s why when they purr you are mesmerized and unable to do anything other than caress them so they will continue to purr.

And when your cat disappears, it’s generally because he’s been beamed up to give a report to his superiors regarding you and your activities.

The extraterrestrials who came to help the Egyptians build pyramids brought along some cats.  The Egyptians liked the cats so much they created a cat goddess, Bastet.  Cats were mummified in her honor and cat statues made as votive offerings.

Bastet is often portrayed holding the ankh, breath of life symbol, in one hand and a sistrum, sacred rattle, in another.  She is not only the goddess of cats  but of dance joy, music and love as well. 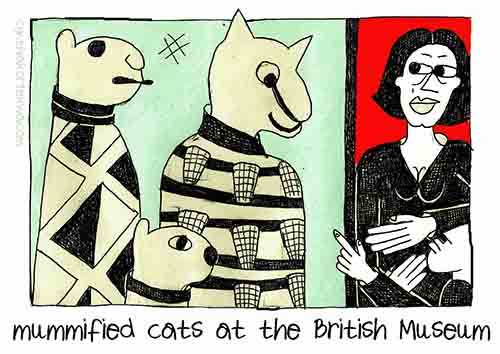 The British Museum has an enormous collection of cat related objects.  This includes mummified cats from a cemetery at the main center of the Bastet cult. Unfortunately, many cats did not die naturally.  Because of the obsession to win favors with Bastet, cats were killed on purpose (often by breaking their necks) just so they could be mummified and offered to the goddess.

Question:  is worshipping a god more important that respecting life?

The Storyteller....
View all posts by Art for Housewives →
This entry was posted in Drawings & Paintings and tagged alien cats, aliens, Bastet cult, cats, Egyptian cats, mummified cats, purrs, the Martians are coming. Bookmark the permalink.