One Sunday morning, Ute and I finally got together for a coffee at Marani’s. We mentioned our need for more physical exercise.  She does yoga and I walk. Ute, unlike a flâneur,  said she didn’t like to walk unless she had a destination. That word “destination” started buzzing around in my head. And I wondered if having a point of arrival would make a difference for me when taking my daily walk.  So I decided to give my walks a direction.

Not far from my studio is the Verano Monumental Cemetery that I’d never explored before and , after my talk with Ute, decided to do so. 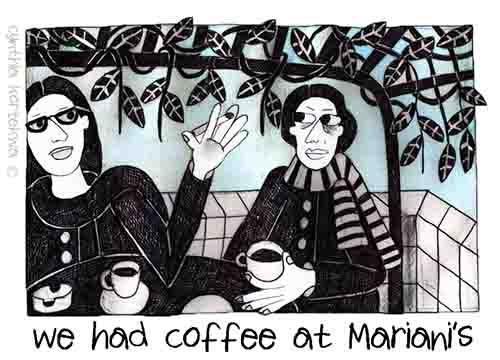 Roman Emperor Valerian, descendent from a distinguished Etruscan family, had to overthrow an emperor to become one himself. Believing that the Christians were subversive and threatened his power, around 257 AD he declared the Church a criminal enterprise and persecuted all of the Christians he could.  There were so many executions that the widow Ciriaca donated land for a Christian necropolis.  Initially the land was just a field of grass outside of Rome owned by her family and known as Campo Verani because Verani was the family name.

The Law of Retribution caught up with Valerian and he was captured and abused by the Persians.   Before executing him (260 AD), King Shapur I used the emperor to mount his horse.

Today the remains of the martyred Ciriaca and St. Lawrence are buried in what is known as the catacombs of St. Ciriaca.   During the Middle Ages, a basilica ( Basilica of Saint Lawrence outside the Walls) dedicated to St. Lawrence was built on the spot. Inside there’s an entrance to the catacombs whereas the outside façade is decorated with faded frescoes that includes a scene representing St. Lawrence’s martyrdom.

Adjacent to the Basilica is the Verano Monumental Cemetery. But first a little bit about the Napoleonic rule of Rome.

After the fall of the Roman Empire, the Papal States were founded in 754 AD. They monopolized all of central Italy and, in an attempt to ensure their power, prohibited the development of literacy and culture. Furthermore, they claimed that the desire for independent thought was a form of vanity.

In 1793, Marie Antoinette was beheaded.  Napoleon was 24 years old at the time and very ambitious.  Five years later, Napoleon’s troops occupied Rome disrupting the equilibrium of the Papal States.

The French thus imposed many of their norms on Rome including that of the Edict of St. Cloud, a law stating that all urban cemeteries, for health reasons, were to be placed outside the city walls. And thus the birth of the Verano Monumental Cemetery. However, what we see today is mainly the plans of the architect Virginio Vespigani who completed the cemetery in 1871. 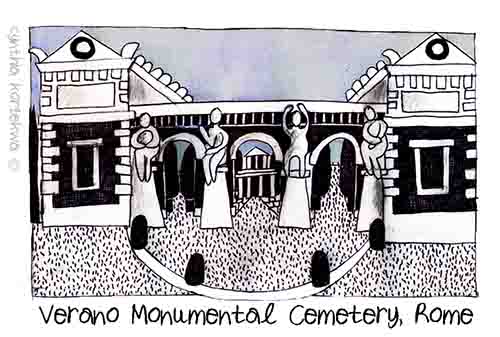 The Verano entrance has three arched doorways flanked by statues representing Meditation, Hope, Charity, and Silence. Because people keep dying, the cemetery has gotten bigger and bigger and now covers more territory than does the nearby Sapienza University.

Walking inside the Verano,  the atmosphere is soft, silent and potentially melancholic.  There is nothing more present than the past.  After walking and looking and sighing for a couple of hours, I realized  every tombstone has a story to tell.

The stories are of an Italy that no longer exists, of people who are remembered and forgotten, and of lives that have changed because of a life that‘s been lost.

So I plan incorporating the Verano into my Photogenic Lifestyle. First of all, it gives me a great place for a walk—it’s quite, full of cypress trees, and has incredible art to look at.  In fact, it has been called a “ museo all’aperto”, an outdoor museum, because of the sculptures and paintings made for the tombs.

Secondly, the Verano Monumental Cemetery  tells the history of Italy from the early 1800s to the present. It’s  intrigued me so much that  I’ve decided to use it as a point of departure for me to rediscover the country I’ve been living in for the past 35 years.

Related: Monumenti al Verano. Un museo all’aperto. (scroll down for brochure in English) + Basilica of Saint Lawrence outside the Walls + the catacombs of Rome

The Storyteller....
View all posts by Art for Housewives →
This entry was posted in Drawings & Paintings, Rome/Italy and tagged Edict of St. Cloud, Napoleon, photogenic lifestyle, Rome, Saint Lawrence outside the Walls, Valerian, Verano Monumental Cemetery. Bookmark the permalink.