Between 1880 and 1910, an arts & crafts movement exploded in Europe. It was a reaction against the decline in standards resulting from factory produced as opposed to handmade objects. Quality as opposed to quantity was now the objective.  But World War I emphasized the need for technology transforming, once again, artistic standards.  Nevertheless, there was an appreciation for the applied arts that today is non-existent. Stained glass, wrought iron, ceramic, mosaics and bas reliefs abounded. Two exponents of Italian applied arts were Cesare Picchiarini  (1871-1943) and Paolo Paschetto (1885-1963).

One of the reasons why I love Verano Monumental Cemetery is because it offers so many examples of Italian applied arts. The Cappella Calderai  (commissioned by engineer and builder Ugo Calderai) is a great example. The cappella’s stained glassed window was made by Picchiarini.  No religious figures as often found at the cemetery but, instead, roses.

Symbolically, the rose has been given many meanings. For example, in ancient Rome, the Rosalia was a yearly festival of roses and the flowers were place on tombs as they were symbols of resurrection. Another symbol is that of the pentalpha star as the five petals of the wild rose have been identified with the five points of a star.

Paolo Paschetto is an intriguing and, in some ways, ambiguous figure. Son of a Waldensian pastor, he considered his artistic activity as the making of sacred art. In 1914, he designed  the stained glass windows for the Waldensian Church on Via Cavour in Rome and, in 1924, he designed the windows for the Methodist Church in via XX Settembre although it was Picchiarini who actualized the work.  Paschetto also created the logo for the Italian Assembly of God church (“Tutto l’Evangelo”).

The stained glass windows designed by Paschetto are, obviously, full of symbolism.

Some examples:  The grape vine in Christian symbolism comes from Jesus having said “I am the vine”.  A lamb standing with a banner, the Agnus Dei, represents Jesus who has risen and victorious over death. With the flaming tower, the tower represents a refuge whereas  the flames represent the Holy Spirit.

Because he was a freemason, Paschetto’s role in designing not only postage stamps for the Republic of Italy but the country’s emblem as well, raises a few questions.  For one, the pentalpha star that dominates Italy’s emblem is the same as that used by freemasons.

Paschetto used the wings of Hermes for the Italian express mail stamps he designed.  One shows the King, Vittorio Emanuele III, with wings whereas another stamp depicts the winged foot of Hermes.

Hermes appears frequently in freemasonry art.  Hermes, with his wings, can transcend boundaries and move from the world of mortals to the world of the gods.

The flaming torch is another masonic symbol used by Paschetto for another stamp design. It was also used by  freemason sculptor, Frederic A. Bartholdi ,(1834-1904) for the Statue of Liberty.

Paschetto was one of the main protagonists of the Liberty Style (Italian art nouveau) thus much influenced by the Belgian, Victor Horta (1861-1947). Horta, a freemason, thus another controversial figure, had much to do with the creation of art nouveau.  The new style, that quickly captivated the bourgeoisie with its meandering lines, was often associated with freemasonry and its liberal politics. 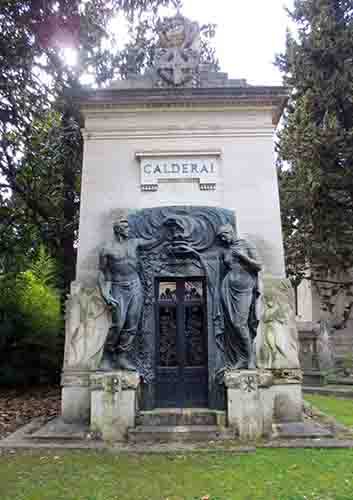