Identification of the Moment: Parian Coast, looking west, May 2017

Description: a digital foto taken of the horizon line as seen from the offing of Parikia.

Analysis: there are clouds and waves but the foto is dominated by the horizon line. The word “horizon” comes from the Greek verb ὁρίζω (orizo) meaning “to divide or to separate”.  It is an illusionary boundary that separates the sea from the sky. In fact, the picture is divided into two. 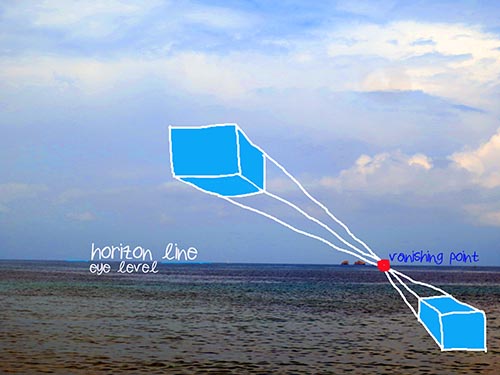 Linear perspective, so popular with Renaissance artists, used the horizon line as a point of departure. A vanishing point was established providing the juncture for  converging parallel lines. But  parallel lines by definition cannot converge. Thus perspective is a representation of reality but not reality itself…a lie meant to represent the truth.

Interpretation: The horizon symbolizes a far away destination many dream of reaching. But the horizon is an unkempt promise –it is only an illusion thus impossible to reach.

Conclusion: The horizon is a meeting place but also a boundary.

For further exploration:  For Nietsche, all horizons are man-made… The Horizon Concept in Nietzsche’s Philosophy +  Nietsche on Drinking Up the Sea

The Storyteller....
View all posts by Art for Housewives →
This entry was posted in Paros, THE DIARY OF LUZ CORRAZZINI and tagged critique sheet, horizon, horizon line, linear perspective, Nietsche, Paros, perspective. Bookmark the permalink.