Above all, respect yourself.

Morning walks give me a chance to interrelate with my neighbourhood. And, as many urban walkers will agree, cars (and their drivers) are a nuisance. They make noise, pollute the air, and are arrogant in terms of space appropriation. Like the car pictured below that parked on the pedestrian crossing in front of Parco Nemorense.

To reprimand the driver for illicit parking, in Rome it is not uncommon for someone to lift up the windshield wipers. It is a non-violent way to let the driver know that his lack of respect for others has not gone unnoticed. 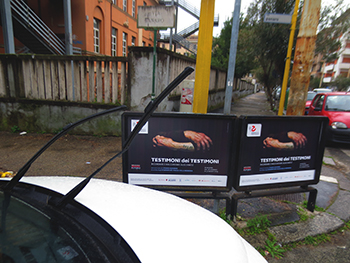 Mutual respect is a kind of glue that keeps a society together and functional. Without taking the needs of others seriously, why should your needs be given special consideration.

Once public humiliation was a means of punishing someone for disgraceful behaviour—pillorying, flogging the feet, publicly shaving off a woman’s hair, the wearing of a scarlet letter, etc.

But reprimanding should be done with good taste. And respect. Otherwise, what’s the purpose?

Pythagoras of Samos left his island for Crotone, a coastal town. Here he founded his school, the Pythagoreans. All the fresh sea air got his dendrites growing and he came up with many new ideas. But although he believed in theorems, he did not believe in democracy. Pythagoras’ opponents set out to destroy him.  One day they chased after him and the philosopher ran and ran until he arrived at a field of fava beans.  Believing that these beans provoked a blood disorder, he was afraid to run across the field and stopped. This gave his enemies time to capture and later kill him.

The Storyteller....
View all posts by Art for Housewives →
This entry was posted in Age of Reconfiguration, Rome/Italy and tagged Favism, Parco Nemorense, Pythagoras, walking. Bookmark the permalink.