During the summer, I often use a corner on our terrace as an outdoor studio. As it faces west, the terrace is a great place to be in the morning. That is, until about 11 a.m. when the sun makes its presence felt. To extend my studio time, last summer I bought a beach umbrella to create some shade. This summer I noticed the umbrella had various horizontal tears on the folds exposed to the sun when the umbrella was closed. And the umbrella had only be used a couple of months last year.

This is outrageous and a total misuse of our natural resources. Products that do not comply with the principles of ecological sustainability should be illegal as they put the survival of this planet we call home at risk.

Obviously I had no intention of buying another umbrella and decided to repair it boro style. Initially I tried sewing on some patches but life is too short for such an ordeal and decided on water downed glue instead. The glue actually worked better than needle & thread. Now all the tears have been patched but I suspect I’ll being seeing new ones soon.

The umbrella was made in China, a country known for its cheaply made exports. But even the Chinese are aware that the planet has problems. NASA satellites have revealed that the world is greener than it was 20 years ago. And this thanks to China and India that have actualized hard core tree planting programs.

Ethiopia has also decided to plant trees to reduce environmental degradation and claims to have planted 350 million trees in a day. And a few years ago, India planted over 50 million trees in one day calling for volunteers from all over the country to help plant trees in order to fight climate change. The Philippines also has a tree planting program and encourages students to participate.

Planting trees could help buy more time in dealing with climate change. Green roofs are also helpful such as those created in Chicago, Washington DC, and France.

Phytoremediation is the use of plants to remove toxins from contaminated soil, air, and water. For example, if big cities were to plant more trees and make significant use of green roofs, smog could be greatly minimized. The World Health Organization estimates that 4.6 million people die each year from polluted air. Killer air destroys more lives than automobile accidents do. 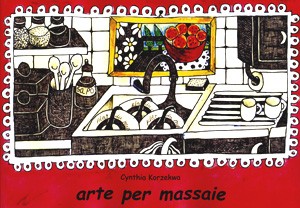 Several years ago I published a graphic essay entitled ARTE PER MASSAIE (Art for Housewives) encouraging women to “make art, not trash” by recycling household trash to make beautiful and functional objects. I also encouraged the exchange of plant clippings and green roofs.

Often the easiest solutions are the best. And what could be easier than planting trees to pollution and climate change?

1 Response to A Mended Umbrella