Beauty is the only truth I want to know

At the beginning of the lockdown, drones were sent out to immortalize a deserted Rome. The photos were stunning because, without people, the city regained its original contours and majestic beauty. How magical it would be, I thought, to walk the empty streets and carefully observe Rome without the distraction of others. Unable to do so, I made drawings instead. 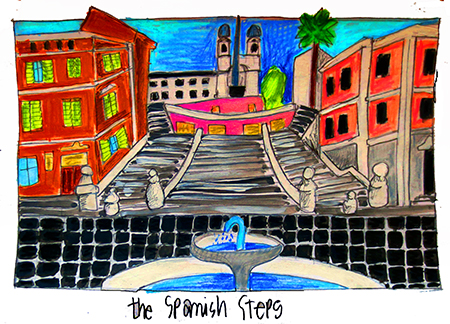 In between the church of Trinità dei Monti and the Barcaccia Fountain designed by Bernini’s father are the Spanish Steps. This monumental staircase of 135 steps has found a place in many films (such as Roman Holiday, The Roman Spring of Mrs. Stone, and The Talented Mr. Ripley). Fitzgerald writes about the steps in Tender is the Night as does Anthony Burgess in ABBA ABBA.

At the foot of the staircase to the right is the “Casina Rossa”. Here a woman named Anna Angeletti rented rooms to tourists. And one of these tourists was the poet John Keats. Suffering from tuberculosis, Keats arrived in Rome in hopes that a change in climate would improve his health. From his room on the second floor, he could hear the water gurgling in the fountain. It was this sound that kept the poet company when he was overwhelmed by that particular kind of solitude felt by those who are dying. Keat’s died in his room next to the Spanish Steps on February 23, 1821. The poet was only 25 years old. Buried in Rome’s Protestant Cemetery, he asked for this epitaph to be placed on his tombstone: “Here lies one whose name was writ in water.”

Two years before his death, Keats wrote his most well-known poem, “Ode to a Grecian Urn.” Like Isadora Duncan, Keats made many visits to the British Museum and, like Isadora, was impressed by the Greek vases. The vase paintings with women dancing around with veils inspired many of Isadora’s dance routines. Keats, on the other hand, was inspired not to dance but to write an ekphrasis, a poetic description of a work of art. So overwhelmed by the beauty of the vases, Keats decided that spontaneous emotions held more truth than did dry reasoning. Thus, he wrote, “Beauty is truth, truth beauty.”

The vase that Keats calls the “still unravished bride of quietness” is, really, nothing more than painted clay. Nevertheless, it speaks to humanity. And for those who cannot hear it speak, Keats writes an ode. But a work of art is like the Tower of Babel and speaks as many languages as it has people looking at it.

“Beauty is in the eye of the beholder,” wrote Margaret Wolfe Hungerford in her 1878 novel Molly Bawn. But to see this beauty, you have to open up your eyes and look around you. And I wonder if, after so many days of being inside, the outside world will look any differently once the lockdown in over.

The Storyteller....
View all posts by Art for Housewives →
This entry was posted in Art Narratives, Beauty, Rome/Italy and tagged coronavirus, ekphrasis, John Keats, Living the Lockdown, Spanish Steps. Bookmark the permalink.