This post is dedicated to that incredible plant, Aloe Vera. My mom used to keep one on the front porch and, aside from the aesthetics, used it for burns.  Because it works.

Aloe Vera plants are succulents and consist mainly of water.  Since at least the beginning of the first century AD, aloe has been used for medicinal purposes.  And I know from personal experience that aloe is great for the skin. During the summer when on Paros, I take a leaf of aloe and slit it open lengthwise with a knife.  Then I rub the gel from the plant all over my skin. There’s something magical about the plant and it makes my skin look and feel great. Once finished, I put what’s left of the aloe leaf in my composte pile.  Could anything be easier, more economcal and environmental?

After shaving your legs, rub aloe gel straight from the plant onto your legs. You will be amazed at how soft your skin will feel afterwards. It’s also good for the heels when the skin is cracked and dried. Really! Try aloe gel for skin blemishes (including acne), itching insect bites and sunburn.  Fantastico! 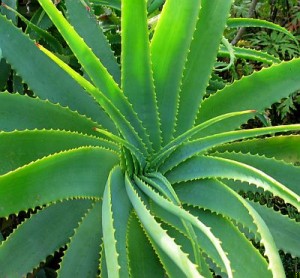 A Tsp. of Aloe Daily Reverses Signs of Skin Aging

Making Aloe Shampoo with Bicimaquinas and Aloe is also good for the hair especially if it’s thick and/or brittle.  Women in Guatemala use it and make a shampoo by scooping the gel out of the leaf then liquifying it.

Aloe can also be used to treat digestive and bowel disorders… so why not add some aloe gel to your smoothies?

I use it so much that I decided to dedicate a huipil to aloe as a form of appreciation for all the plant does to help me. You know, something like a retablo with the idea of manifesting appreciation. 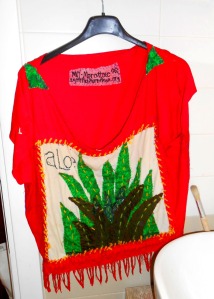 This is a huipil I made using vintage linens found at the San Lorenzo outdoor market.  One thing I’ve always admired about Italians is their sense of aesthetics especially in terms of the everyday.  For example, their traditional use of quality linens.  Once it was customary for all young women to prepare a corredo, a textile dowry/trousseau, using fine linens embellished with delicate handiwork.

The huipil in the foto above was made from a red linen runner, dish towel and fabric scraps. And the aloe was created with applique. Fabric collage. 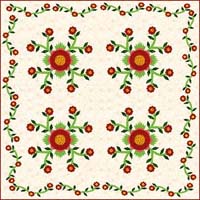 The muraqqa’a (which in the Arab world refers to a scrapbook) were patched, apparently intentionally, with colored rectangles

Muraqqa (Muraqqa’) can be literally translated from Arabic as “a collection of fragments”, however, it is a term applied to Islamic art denoting an album comprised of various samples of paintings and miniatures, calligraphic work, and a range of sketches. Dafatirs and muraqqa are albums where word and text are assembled.

4 Responses to Aloe, Applique and Marcottage