Looking for the poetics in everyday life

This morning I woke up with the desire for poetry, with the desire to poeticize my world. I am tired of the dreariness and sense of oppression that this economic crisis has subjected us to. I am tired of turning on TV news only to hear over and over again about People In Power who have robbed the citizens, the same citizens who now have difficulty providing for their families because of an economic system controlled by greed and corruption.

People are exasperated. So many out there walking around with their foreheads corrugated, their shoulders slumped and their nerves so frayed that, at the slightest inconvenience, they go into a rage.

I am not only tired of this but also disgusted by these men who kill their EX’s because they, the macho men, don’t have the backbone to accept a woman’s “No”. In Italy, on the average of every 3 days, a woman is murdered simply because  she has rejected a man.  In the US, according to some statistics, a woman is raped every 2 minutes simply because a man has given more importance to dominance than to dignity.

Being constantly surrounded by such negative energy is overwhelming and can drastically effect one’s behaviour. So it’s time to stop resonating and start sending out powerful vibrations of one’s own.

Well, I still haven’t found an internet tutorial on how to activate this change but I do know that the journey begins at home, from within,  so that’s where transformation begins, too.

Dealing with the sense of anxiety that has permeated the collective mentality is very demanding. And very fatiguing. This has been my major preoccupation:  where am I going to get the energy necessary to affront the spOOKiness to come?

Luckily, my research has led me to this discovery: Cinnamon and Honey. A Ayurvedic cure that’s been around for centuries, this concoction offers a multiple of cures-wounds, arthritis,  heart disease, weight loss and much more (see links below).

I have been taking a cinnamon–honey mix every morning for about a month now and can feel an incredible difference.  My energy level is balanced, my memory has improved and my nerves are anchored. Well, sort of.

So this represents my first step in the search for poetics, the poetics of well-being.

When I feel good, I am good.

My name is Stella Meades. I am an artist living in Parksville, British Columbia, Canada. In 1996 I completed footnote, an installation of 1001 hand-built, child-sized ceramic shoes. The shoes were unglazed, smoke-blackened, and altered to suggest some of the ways in which children affected by war have suffered. 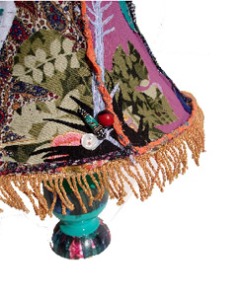 The Storyteller....
View all posts by Art for Housewives →
This entry was posted in Health & Healing and tagged Cinn, Daily Aesthetics, honey and cinnamon, poeticize, Poetics, Reconstructed fashion. Bookmark the permalink.

2 Responses to Looking for the poetics in everyday life