My home starts with my body

The first home is the womb. It’s where our life begins. Ancient cultures had a respect for it that, unfortunately, is now obsolete.

Prehistoric human figurines have been found throughout Europe dating from c.25,000 BC to c.2,000 BC which means they’ve been around much longer than written history (which has been around for about 5,000 years).

These figurines are small generally 4 – 22 cm in height making them portable. The majority are of women and have a tendency to emphasize breasts and hips.  Facial features are not taken into consideration.

Many such figurines have been found in the Cyclades. Those representing women are stylized and static. Whereas figures representing animals or men are often shown engaged in some kind of activity such as that of the famous harp player.

On Market St. here in Parikia, there’s a shop selling souvenir Cycladic figurines. Most of these little white statues are similar in that they have arms folded under the breasts and triangular incisions indicating female genitals.

Archeologists still have not been able to come up with an explaination for the existential purpose of these little statues. But, because sexual characteristics were exaggerated, it’s logical to assume that the concept of fertility was involved.

The Cycladic civilization flourished in the Aegean from about 3300 – 2000 BC. Much of what is known regarding Neolithic Cycladic art comes from excavations at Saliagos off Antiparos, Paros’ “little sister” island. Figurines from this area were found mainly at grave sites.

The Cyclades are a group of about 30 islands. They were called kyklades by the ancient Greeks who imagined they formed a circle, kyklos, around the island of Delos. Delos was a sanctuary dedicated to Apollo. But it also hosted the Shrine of Dionysus with its many gigantic phallus sculptures and related reliefs.

Life begins in a woman’s body post male orgasm. A woman takes a man’s pleasure and turns it into life. Certainly, if pregnancy were based on female and not male orgasms, the world population would be a fraction of what it is today. But instead of receiving gratitude, women have been minimized and stripped of their sacredness. The aims that today’s patriarchal societies have for us are no longer spiritual but, instead, political. So ladies, isn’t it time to stand your ground when it comes to defending your first home, that of your body? 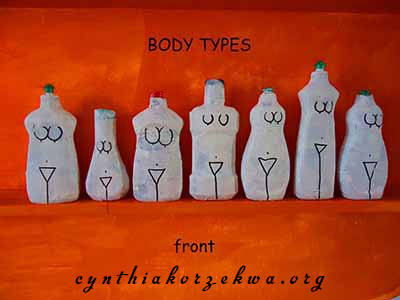 Figurines made from dish detergent bottles

The Storyteller....
View all posts by Art for Housewives →
This entry was posted in Ecofeminism and tagged Body, Human figurines, Neolithic Cycladic art. Bookmark the permalink.

7 Responses to My home starts with my body