Posted on February 1, 2020 by Art for Housewives

The Depression left some areas in the U.S. more devastated than others. Lorena Hickcock, journalist and intimate friends with Eleanor Roosevelt, travelled to the Appalachia and witnessed the desperation and the struggle for survival. Eleanor, who felt education was a necessity in a democracy, helped launch the Pack Horse Library Project sponsored by the WPA.

From 1935 to 1943, some 200 women on horseback helped deliver books to remote regions in the Appalachian Mountains. These women were paid $28 a month. They were not paid for expenses such as the horse or mule they rode.

Many men, unable to deal with the difficulties of the Depression, abandoned their families. Other men, such as miners, often fell ill due to work-related problems and could no longer provide an income especially as labour unions had no power to impose disability compensations. Women were often the only source of potential income needed to feed their children. And for this reason, they were willing to subject themselves to the difficulties of delivering books to isolated Appalachian homes.

Rural homes seldom had roads leading to them. So not only did the Pack Horse Librarians have to spend hours riding, they also had to affront aggressive geographical and extreme climatic conditions. Nevertheless, these brave women not only delivered books, they often gave reading lessons and read to the ill and the illiterate.

The most popular books were the Bible, those by Mark Twain, “Robinson Crusoe”, “Rebecca of Sunnybrook Farm”, and “Gulliver’s Travels”. Women’s magazines were also popular. The books were not supplied by the government and came mainly from donations. Thus there were a few books and many borrowers. This meant that books easily wore out. To make sure the books weren’t dog-eared, librarians made bookmarkers from old Christmas cards, wallpaper, and old flower catalogues. And what is truly amazing are the scrapbooks made to supplement the library. These scrapbooks were made from books and magazines so worn out that they were falling apart. So the librarians deconstructed them to create new books. And handwritten recipes and hand drawn quilt patterns were often included. These scrapbooks, aside from being works of art, were the testimony as to how important it was to share information—and how humans have a need for knowledge. 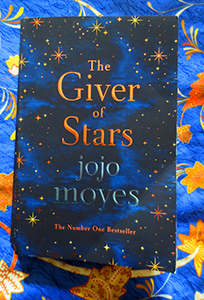 Jojo Moyes’ bestseller, “The Giver of Stars”, is about these librarians. The book is a lovely Sunday morning reading in bed book. The title comes from a poem by Amy Lowell. I guess a librarian could be compared to a giver of stars. Because “To seek knowledge is to expand you own universe.”

“The Giver of Stars” reiterates these concepts: 1.books are fundamental for the mind that wants to expand 2.there is power in female synergy & solidarity 3.we need to nourish that sensation of feeling good after we’ve done something good.

The Storyteller....
View all posts by Art for Housewives →
This entry was posted in Books and tagged Appalachia, Jojo Moyes, Lorena Hickock, Pack Horse Library, reading, scrapbooks, The Giver of Stars. Bookmark the permalink.