The Power of Sound and Janet Cooper

When my wonderful friend Janet Cooper was recently in Rome, she gave me the book The Power of Sound. Janet and I both share an interest in self-healing via sound, vibration, frequency and dance. 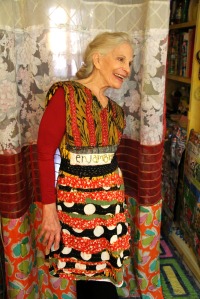 Janet at my studio wearing a Muy Marcottage dress

While in the womb, Alfred’s mother was not at all happy about her pregnancy and tried hiding it. Probably because of this, Alfred was born 2 ½ months prematurely and, thought to be dead, was tossed into a basket. Luckily, his grandmother, took him from the basket and saved his life. But all of the negative energy he experienced inside his mom made him a sickly child. At least his father decided to take interest in him.

Alfred grew up and became an ear, nose and throat specialist.  His father, Umberto,  an opera singer, began sending his colleagues having problems “staying in tune”. Opera singers, singing at their full vocal power, can emit between 110 and 140 decibels. And, since the sound comes from within, said Alfred, even though the “energy of a singer is not comparable to that of a jet engine, the intensity of the sound is the same”. And, since “the amount of time a singer had practiced was directly proportional to the amount of damage to the ear”, Alfred deducted that it was the opera singer’s own voice that caused a loss of certain frequencies from their voice.

Alfred claimed that “the voice contains only those sounds that the ear can hear”. So, if you can’t hear it, you can’t say it. So he developed a method for affronting frequency hearing loss.

Sounds can be shaped into music. Music helps make the blood flow which gives oxygen to the brain. So why not make a musical instrument to play?

Bottle top shaker (Sistrum rattle). Made from a sturdy twig that has been lovingly wrapped in colourful material. Flattened bottle tops make a pleasant jingle sound. 30cmx16cm – size might vary due to the organic nature of this product.

The first oil-can guitars were made in Africa and were called ramkiekies.

Pseudo-Tomatis Healing Sounds. Britons speak English in frequencies between 2,000 and 12,000 Hz; the French speak their language in frequencies mainly between 1,000 and 2,000 Hz. Tomatis theorized that the discrepancy in pitches between these languages makes the French “deaf” to English and vice versa. This is the primary reason it is so difficult for Britons and French to learn one another’s language.

Raise Your Voice + Set Your Voice Free: How To Get The Singing Or Speaking Voice You Want + How to Change Your Voice Pitch + How to make your voice sound deeper.

The Secret Life of an Unborn Child

The Storyteller....
View all posts by Art for Housewives →
This entry was posted in Sound & Music and tagged Alfred Tomatis, Dance Therapy, Frequencies, Janet Cooper, Power of Sound, Vibration, Voice. Bookmark the permalink.