Muy Marcottage dress “Jerry Hall & I” via M’Arte: Jerry Hall and I have 3 things in common including our fondness for the poetry of Wendy Cope.

One cold February night, I became a Born Again Rolling Stones Fan. Alone in my studio and needing some animation,  I put on the Stone’s 40 LICKS TOUR DVD. It wasn’t the first time I’d heard it but, for some still unknown reason, that night listening to the Stones was like a mystical experience. Well, maybe mystical isn’t exactly the right word but I do remembering thinking as I watched them: Hey man, just how old are these dudes?  And that was the beginning of  The Quest–an intense desire to know how, after all the years of A Heavy Duty Rock’n Roll Life Style, they were still alive, healthy and playing with so much Energy.

We often talk about energy but what is it anyway? After much research via internet and Amazon, I’ve come to the conclusion that energy is simply whatever it takes to make you move.

The absence of energy is a result of blockage. If you’re blocked, you simply don’t move.  But the progress regarding these studies will be posted in the future.  For now, I would like to briefly focus on Mick Jagger and his throat chakra.

Chakras are centers of energy, located on the midline of the body. There are seven of them, and they govern our psychological properties. The chakras located on the lower part of our body are our instinctual side, the highest ones our mental side.

One of the seven chakras is that of the throat also known as the Vishuddha chakra. Obviously, it is related to the concept of communication and self-expression.  So what does this have to do with Mick Jagger?  Well, during My Quest, I came across two different versions of Mick Jagger singing “No Expectations” and found the Older Mick sounding so much better than the Younger Mick. The difference was such that I wondered what had happened in the meantime. After more research and reflection, I came to the conclusion that the change was a result of Mick opening up his throat chakra.

More research led me to an article re: otolaryngologist , Dr. Brian Hands, who has won worldwide recognition for having helped many singers regain control over their voice. Dr. Hands says that 85% of the time when singers come to him for help, the main problem is that of personal anxiety.  And anxiety affects the voice.  Dr.Hands thus, to work on the voice, works on the throat chakra. Because anxiety impairs and blocks expression.

So why not make your throat happy and wear a necklace! 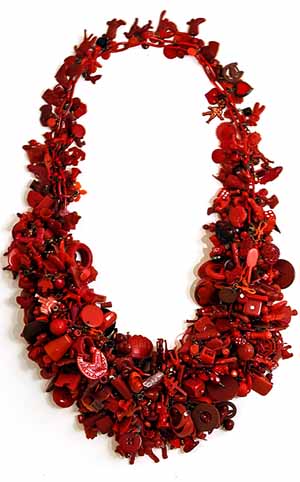 I have taken advantage of Marisa Ramirez’ very addictive Tumblr for most links.  Thanks Marisa!